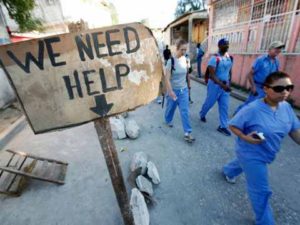 (Reuters) – U.S. and international health officials on Wednesday formed an alliance to end a cholera epidemic in Haiti and the Dominican Republican that has killed thousands and spread to other countries since an earthquake devastated the region two years ago.

Officials from the Pan-American Health Organization, UNICEF and the U.S. Centers for Disease Control and Prevention said they would join with the Haitian and Dominican governments to develop a plan to eradicate cholera from the island the two countries share by extending clean water and sanitation to stricken areas.

The effort faces a daunting financial challenge if it is to meet a goal of reaching at least two-thirds of the Haitian population by 2015, a task that could cost $1.1 billion.

The earthquake that struck the island of Hispaniola two years ago killed 300,000 people, left 1.5 million homeless and unleashed one of the world’s largest recovery efforts. But the international community has been widely criticized for moving too slowly to bring aid and development.

The Western Hemisphere’s only cholera epidemic has infected nearly 550,000 and killed 7,400 people in both countries since October 2010, nearly all of them in Haiti, according to CDC figures.

Cases of cholera first emerged in central Haiti’s Artibonite River region, and many Haitians said the disease came from the peacekeepers from Nepal, where cholera is endemic. That belief sparked some anti-U.N. riots in the impoverished nation.

Health workers continue to see 100-200 new cases per day and warn the daily rate could surge to 1,000 new cases after the region’s rainy season begins in coming months.

Cholera is an infection that causes devere diarrhea that can lead to dehydration and death. It occurs in places with poor sanitation and can be treated by drinking clean fluids.

The disease has already spread to neighboring countries in the region including the United States.

“This is a time bomb for other countries,” said Dr. Mirta Roses, director of PAHO, the regional branch of the World Health Organization.

Officials predicted that $4.5 billion in public aid pledges to the region would cover the cost of eradication. But only 53 percent of those pledges have been disbursed by donors, according to the United Nations.

Roses described the assembled organizations and governments as the core of a new alliance that she hoped would grow to include other partners including sanitary engineers over the coming year.

“Without this improved infrastructure, the likely future in Haiti and the Dominican Republic is endemic cholera for decades to come, as we have seen in many countries in sub-Saharan Africa with water and sanitation indices similar to Haiti’s,” he said.