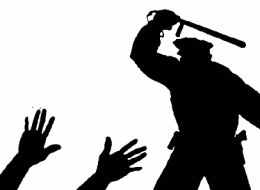 A “use of force” investigation has been opened into a confrontation Monday night in which one L.A. County sheriff’s deputy struck a female bus passenger in the face while another held her from behind.

Another passenger used his cellphone to capture the incident on video, which was first aired by NBCLA. The Sheriff’s Department has not released the name of the woman or the deputies.

The department is investigating the incident, said spokesman Steve Whitmore, who also defended the deputies, saying “they took what we believe was the appropriate action.”

He said the deputies boarded the bus in Bellflower after somebody called 911 to report that a woman “appeared to almost attack an elderly man.” The Sheriff’s Department has not released a tape of the call, but Whitmore said the caller described the woman as “out of control and confrontational.”

He said the deputies knew the woman and that she had four prior convictions for assault on a police officer.

“They knew she had this propensity,” Whitmore said. “We also knew she had mental challenges. We knew we had to contain the situation because we knew she could hurt others. She’s a very large woman.”

She was not arrested Monday night but was placed on a 72-hour hold for psychiatric observation, he said.

In the video, a female deputy holds the woman from behind while her partner delivers a sweeping blow to the left side of her face. It’s unclear whether he strikes her with his fist or right forearm.

The man who recorded the video told NBCLA that the woman was polite and friendly toward the other passengers as she boarded the bus. He said she started cursing at the deputies when they asked her to get off.

The man, identified as Jermaine Green, also said deputies tried to intimidate him when he refused to hand over his phone. Whitmore said the investigation of the incident also will look at whether such intimidation occurred.

The deputies, who work out of the Lakewood station, are continuing their regular assignments.

2 thoughts on “AND PEOPLE CONTINUALLY CLAIM THE FADH WAS BRUTAL. LOOK WHAT THE LA SHERIFFS DOES!!!Confrontation between sheriff’s deputies, bus rider caught on tape”