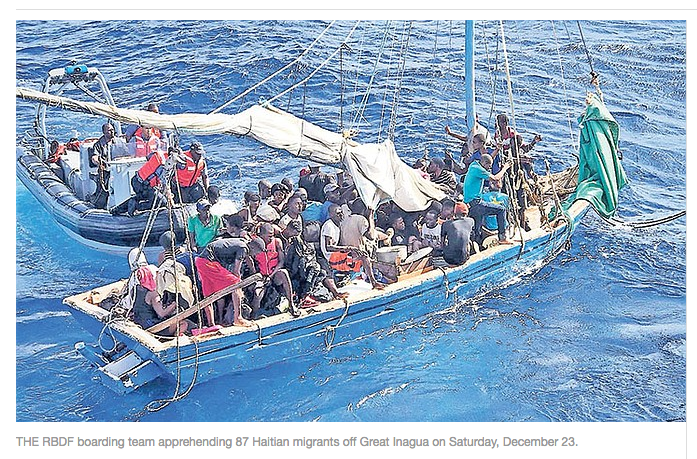 THE Haitian exodus to The Bahamas has arguably become as Bahamian as conch salad. Haiti’s precipitous decline has truly become a legend in the Western hemisphere. Geographically positioned in the worst place possible, they have become a nexus for natural disasters, which does not do anything to help a nation already mired in catastrophic conditions.

Haiti’s unfortunate circumstance has evolved into the perfect storm.

As if a bad situation could not get any worse, she also blames the country’s “poverty, illiteracy, overcrowding, lack of ifrastructure, environmental disaster and large areas without the rule of law as being contributory to an unimaginable catastrophic” chain of events, to which we, the Bahamian populace, experience the ripple effects.

Haiti’s history is peppered with a little more tragedy than triumph – it famously became the first black nation to fight for its independence during the Haitian revolution and defeated the French. The sweet taste of victory was rather short-lived, as they were made to pay reparations to the French totalling millions in gold from 1825-1947.

Haiti was plunged into debt – borrowing from American, German and French banks at excessively high rates – which led to them spending about 80 percent of their national budget on loan repayments.

As if things could not get any worse, the regime of the Duvaliers began in 1957, with dictator Francois “Papa Doc” Duvalier assuming the title of “Haiti’s President for Life”. A path of destruction continued by Jean-Claude “Baby Doc” Duvalier led to a mass exodus of Haitian nationals who fled to escape the havoc.

Desperate to find a better life, the Haitian exodus began, and many migrated to The Bahamas.

Bahamians during the earlier years of the exodus had no idea the first 10,000 Haitians who set out for a new home would be dwarfed in 50 years. Today, totals are still unclear, but approximated to be around 50,000 in The Bahamas.

With Haitians risking their lives to land on our shores, after taking a death defying journey to get here – it would seem that it would be all worth it.

Though they are treated as sub-human by the vast majority of Bahamians, what they experience once unlawfully entering our jurisdiction is a proverbial red carpet in comparison with what they are leaving behind. Perhaps no picture better tells the story than images of tears streaming down the face of a Haitian man caught after having reached his “promised land”.

Dreams of a better life are delayed, but not crushed as they are detained at the Carmichael Road Detention Centre. Many of the men and women who do not make it in their first attempt return home only to raise the funds, hoping to attempt another journey to greener pastures in the future.

It is that desperate for many of these Haitian migrants.

We can actually sympathise with some of them. However, is Haiti’s unfortunate chain of circumstances a responsibility of the Bahamian people? The fact of the matter is no. It is not. We did not destroy Haiti’s agricultural viability. This can be probably be attributed to Mother Nature. We did not destroy their economy and saddle them with insurmountable debt. Perhaps, this is the fault of corrupt leaders, the French, Americans and Germans.

In fact, when you really peel back all of the xenophobic rhetoric, The Bahamas has been far more gracious than others. Yet we are bullied by the international community for our treatment of Haitians, while everyone else ignores the strain their illegal migration puts on Bahamian life.

The inaction by the government that predates our independence has allowed the Haitian exodus to become engrained in our culture and society. With the large sums of money we spend on detaining and repatriation efforts, to the toll undocumented migrants place on healthcare, it is no wonder the Bahamian populace is bitter.

If we take into account the latest government misstep in the case of Jean Rony Jean Charles the Bahamian taxpayer may be stuck with yet another unwanted bill.

Does the government need to enforce the laws of the country regarding to immigration? Resoundingly, yes and always within the powers available to it. Should the government do its due diligence before repatriating a would-be Bahamian citizen? Most certainly – but never trampling on that indididual’s rights protected within the Constitution.

However, when you set aside the embarrassment a government may feel in a stick-measuring contest, the only people left to feel the brunt of the impact are Bahamian citizens. We can sympathise with the desperate people of Haiti but like them Bahamians want The Bahamas to be better for our future generations as well.

This is the single biggest failure of every Bahamian prime minister there has been. Prime Minister Minnis, seemingly guarded when asked for his thoughts on the case, only said the government’s attorneys are reviewing it and t he government will do what is best for The Bahamas.

Prime Minister Minnis, please tell us what do you think is best for The Bahamas as it relates to immigration – not just in this instance – but as a long-term solution. We do not need to be caught in a vortex of political obscurity while the government tries to figure out what needs to be done.

If a law needs to be changed, then we implore you to change it. If not, and the laws of the land as currently constructed pertaining to immigration are acceptable – then for the love of everything holy, enforce them.

What we do not need is flippancy and further inaction. That is why we are able to stare 50 years down the annals of history, only to grapple with the same problem, which is only growing in complexity.

If a Haitian is desperate enough to escape poverty by way of a voyage which only the strong survive – our government’s effort to fight against illegal immigration thus far only advertises a paradise, which many are willing to risk it all to attain.

Do what is best for the Commonwealth of The Bahamas, Prime Minister Minnis.