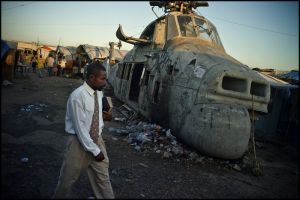 The four-night run of “Haiti on Ice” was supposed to have been last November. But snags such as an ice rink that kept melting and a hurricane last year were blamed for a dozen-plus delays.

The holdups turned the show into a something of a joke. Many weren’t sure it would actually happen.

But it did. The 50-minute show Monday night brought a handful of international skaters before a light crowd in a basketball gym in downtown Port-au-Prince. The skaters did flips and twirls and carried torches.

The performers included Fernand Fedronic of France and Shawn Sawyer of Canada.

The show was organized by a company from Guadeloupe.

This has to be one of the dumbest concepts ever created by the Minister of Tourism. She should concentrate on “Things Haitian” and leave ice skating to the Canadians.