NEW DELHI — India shattered the record for daily cases in the pandemic, reporting more than 400,000 coronavirus cases on Saturday as a devastating surge of infections worsened. 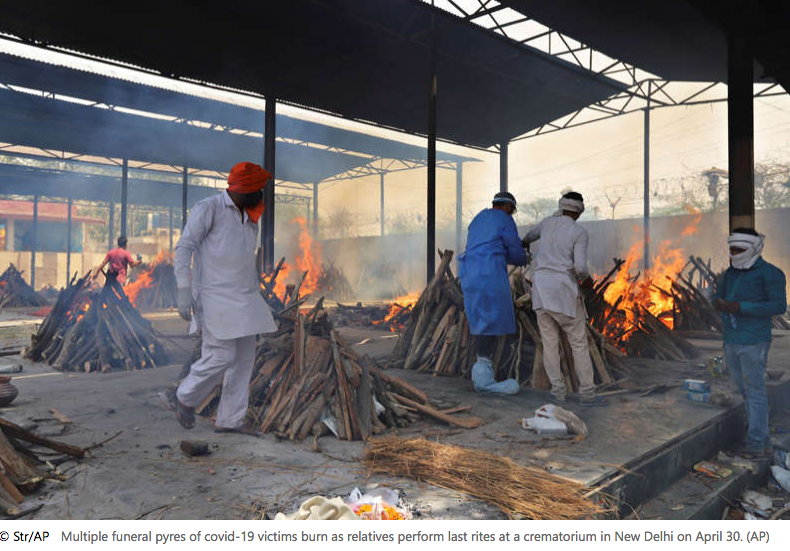 The soaring number of cases prompted the United States to restrict travel from India on Friday. Dozens of countries have begun sending aid to bolster hospitals overwhelmed by patients and short on oxygen.

On Saturday, a hospital in the capital, New Delhi, issued an SOS for oxygen supplies, saying its tank was empty. Eight coronavirus patients died over the next hour before it was refilled, said S.C.L. Gupta, the medical director of Batra Hospital. The dead included one of the hospital’s own doctors. “We have lost him,” Gupta said.

The incident marks the second time in recent days in which an oxygen shortage at a Delhi hospital proved fatal. On April 23, a different hospital ran out of oxygen and 26 critically ill coronavirus patients died.

Anthony S. Fauci, the Biden administration’s chief medical adviser, urged India to explore ways its military could help alleviate the crisis, saying the situation is “like a war” in an interview with the Indian Express newspaper.
He also strongly advised India to implement a nationwide shutdown. “No one likes to lock down the country,” he said. But a temporary lockdown “could have a significant impact on the dynamics of the outbreak.”

India had announced that it would open its vaccination program to all adults over the age of 18 starting Saturday, but in many parts of the country there were not enough doses available to expand the program.

While two private hospital chains said they had procured doses to begin vaccinating newly eligible adults, several state governments said they did not know when they would obtain the necessary supplies.

The oxygen shortages and chaotic rollout of the latest phase of the vaccine drive are adding to a deepening sense of crisis in India. Epidemiologists have said that the number of daily cases could reach 500,000 within weeks, a ruinous burden for a health system already under siege.

Coronavirus has crushed India’s health system. Patients are on their own.India has reported more than 300,000 new cases each of the past 10 days, bringing its total number of infections in the pandemic to 19 million. More than 3,500 people died in the most recent 24-hour period, according to data from the Health Ministry on Saturday.

The figure is an undercount, experts say. Recent reports from crematoriums and cemeteries in different cities and statesindicate that a significant number of covid-19 deaths are missing from official statistics.

In New Delhi, people are waiting for hours at crematoriums to perform funeral rites for their loved ones. Dozens of pyres are being packed closely together in scenes that are without precedent. Every day people are dying outside hospitals, unable to access care.

Several hard-hit areas of the country — including Delhi and the state of Maharashtra — have already announced lockdowns. On Saturday, the Delhi government said it would extend its shutdown for a third week. In a nationwide address on April 20, Indian Prime Minister Narendra Modi said that such measures were “a last option” that should be avoided.

On Friday, Modi met with his cabinet of ministers, which released a statement saying that the situation was a “once in a century crisis.” The cabinet reviewed measures to ramp up hospital beds, oxygen supply and stocks of essential medicines.

In a sign of the desperation in India’s capital, the Delhi High Court heard a plea by Amit Sharma, a lawyer begging for a bed in an intensive care unit for his severely ill brother-in-law.

In the middle of the hearing on Friday, Sharma told the judges that his brother-in-law had died and no more efforts would be required. “I have completely failed,” Sharma said, according to media reports.

“No, the state has failed,” one of the judges replied, after a moment of stunned silence. “We all have failed.”

Volunteers are attempting to do what they can. Srinivas BV, president of the youth wing of the opposition Congress party, is leading an effort to answer distress calls on social media and the messaging platform WhatsApp. A couple of weeks ago, his group was still managing to help patients get beds in government hospitals. Now that, too, is proving nearly impossible.

“People are dying not because of [the virus] but because they’re not getting basic treatment in time,” he said.

One of them was Raja Ram Tiwari, a 64-year old retiree who used to work for India’s state broadcaster. His condition worsened on April 25, said his son Shantanu, who spent hours the next day running around the city trying in vain to secure an oxygen cylinder on the black market, where he was told it would cost $800 or more.

That evening, after calling dozens of hospitals, the family found a facility willing to admit Tiwari in a neighboring state, 60 miles away. Shantanu withdrew his father’s life savings to pay for the treatment and took his mother’s gold jewelry to sell in case more was needed.

He got his father into a taxi but five minutes into the ride Tiwari started to have trouble breathing. They went directly to the nearest hospital, but it was too late. Doctors came outside and told Shantanu his father was dead.

At the first crematorium Shantanu tried, there were already 11 bodies in line before it opened early in the morning. He went to another larger one, hoping it would have more capacity. When he arrived there at 3 a.m., it was conducting a mass cremation of dozens of bodies that had arrived earlier that day.

Shantanu watched and waited hours for it to be his father’s turn. “I have never seen night so silent and the sky lit with so many pyres,” he said.

Shams Irfan in Srinagar, India, contributed to this report.