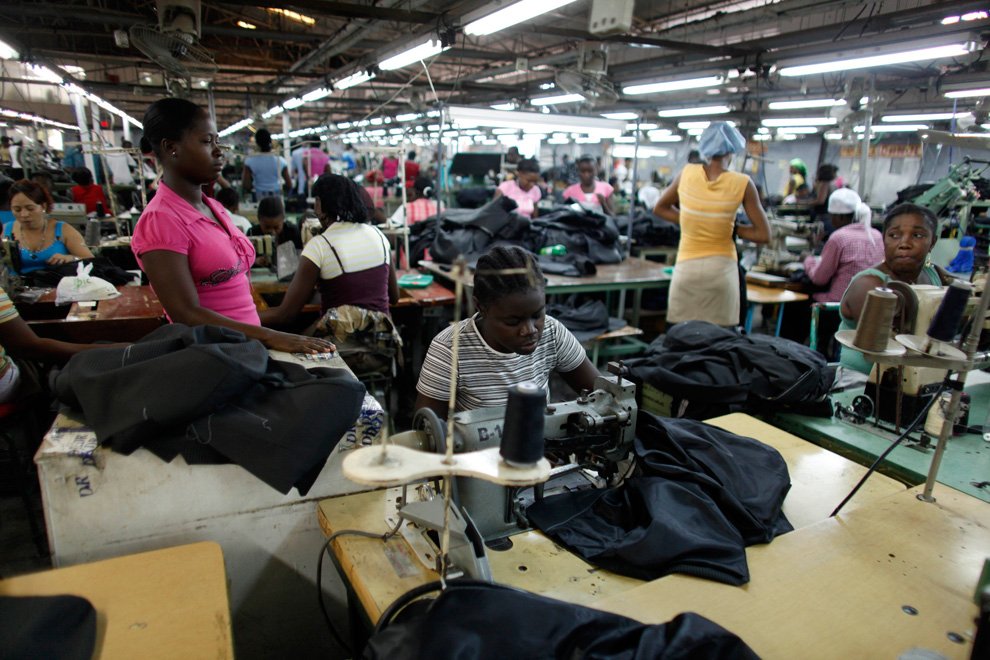 They line up well before the break of dawn, as early as 3 a.m. next to a collapsed hospital in this quake-ravaged capital. With yellow envelopes in hand, and a color photo attached to their hand-printed applications, they wait — holding out hope and a prayer they will be among the chosen few.

“I just want to work,” said Jimmy Antoine, 30, an unemployed manager who lost his livelihood when the hotel he worked in toppled into rubble during the deadly Jan. 12, 7.0-magnitude earthquake. “It doesn’t matter what kind of job. I’ll take whatever I can find.”

Since Jan. 18, the operators of SODEC International, one of Haiti’s few employment agencies, have collected 147,000 applications from job-seeking Haitians like Antoine, who spent hours braving the Haitian heat and chasing rumors of employment opportunities.

Haiti’s desperate plea for jobs is poised to get a huge boost Wednesday when U.S. lawmakers from both chambers and parties approve legislation aimed at bolstering long-term investments in Haiti’s textile and apparel market by giving the Caribbean nation greater access to the U.S. clothing market.

The expansion of the trade preferences would allow Haiti to triple its duty-free access for knits and woven fabrics — while extending the benefits well into the next decade. In 2006, Congress passed the Haitian Hemispheric Opportunity through Partnership Encouragement Act to boost Haitian exports to the United States. It was then modified. This is the third modification.

It’s a move Haitian officials had been pushing for well before the Jan. 12 catastrophic quake but pursued in earnest after the devastation shattered what little there was of Haiti’s economy, and leaving 1.3 million Haitians homeless.

“I heartly welcome this latest move by such a broad coalition of both parties and of both houses of the U.S. Congress to help attract massive investment to Haiti in the textile sector,” President René Préval told The Miami Herald.

Préval said the new access should help to create tens of thousands of jobs — a huge nod “toward the reconstruction of the Haitian economy.”

Following the quake that Préval now says has left 300,000 dead, the world community rushed to Haiti’s aid, spending and pledging billions on the relief and recovery. But supporters of Haiti have long argued that jobs, not handouts, are key to helping the disaster-prone nation get back on its feet.

“The survival and stability of Haiti will be determined in large part by rebuilding a viable economy,” said Sen. Bill Nelson, a cosponsor of the bill. “Expanding Haiti’s access to the U.S. market is exactly the right thing to do at this critical juncture.”

Nelson said the bill is expected to pass the senate chamber unanimously, and could reach President Barack Obama for his signature as early as next week after passing the house.

Mark D’Sa, senior director for sourcing and production with Gap, said the legislation “is a significant step in the right direction.”

Even with the limits the HELP ACT — as the legislation is being called — puts on woven pants and knit T-shirts to protect U.S. jobs and not negatively impact other trade legislations in the region, it will promote benefits, he said. But he warned, while a balanced agreement, it is “not the panacea to Haiti’s problems.”

Still with the Haitian government expressing a desire to create at least three industrial parks outside of Port-au-Prince, and three Korean textile manufactures expressing interest in creating between 10,000 and 30,000 new jobs in Haiti, the legislation comes at an opportune time, say Haitians.

For instance in recent months, at least three Korean manufacturers and government officials have expressed interest in investing in Haiti, visiting the country at least on four different occasions. Two weeks ago the Haitian government hand-delivered a letter to Korea’s foreign minister offering to provide land in exchange for a $50 million investment by the Korean government. The money would go into the creation of a new industrial park outside of the capital near Croix-des- Bouquets where the government and international community recently moved hundreds of homeless families living in a dangerous golf course.

The new industrial park would include housing, as well as the latest factory models.

“There’s going to be a minimum of 50,000 jobs created in the next three to four years and this is important,” said Lionel Delatour, a consultant for the Haitian government who has been instrumental in getting all three special trade legislations on Haiti’s behalf passed.

Delatour said though the initial jobs will be in the garment sector, “the new investors are interested in dying and finising and building textile plants,” which would lead to higher-paying jobs. Today, there are a total of 28 companies and 28,000 workers in an industry that once offered as many as 130,000 jobs.

Georges Sassine, the Haitian government liaison on the trade legislation, said now that the U.S. lawmakers have done their part, the ball is now in the court of the foreign companies. He and Delatour are in Brazil selling Haiti to that South American nation’s biggest manufactures.

The need for jobs here is evident on any given day as Haitians take over sidewalks hoping for work.

On Tuesday, more than 500 people had already handed in applications well before noon closing time to Henry Chery, the director general of SODEC International. An employment agency, the group most recently ran a nine-story hospital that pancaked with 151 people including new mothers inside.

The fact that Haitians would take a job in a factory, even if they are overqualified to operate a sewing machine is the new reality of Haiti, a country where even out-of-work doctors are agreeing to stack boxes for foreign nonprofit groups for $12-a-day because they have a family to feed, Chery said.

“That is what pains me the most,” he said, working from out of a shipping container parked next to the hospital. “People don’t want to live like homeless victims, waiting for a handout. They want to work hard so that they can eat.”

Chery says his goal is to collect 400,000 applications, basing that number on statements, he said, made by Préval during a recent visit by former U.S. Presidents George W. Bush and Bill Clinton to Haiti. The two last month wrote a letter to key lawmakers asking them to support the trade bill.

I am, of course, pleased to see any effort that takes steps to provide jobs for our Nation’s people.

And let us stay away from the wild rhetoric that attacks assembly industry jobs as  “Sweat Shops.”  This is not constructive and is not applicable to the situation in which the assembly industry might not pay their staffs in wages comparable to autoworkers in Michigan…but the Haitian wage paid is comfortable within the Haitian society.

Do-gooders have done more to damage the Haitian workers’ survival, than any other force. Their public pressure can embarrass major manufacturers to the point that they simply switch production to another country – at the same wage scale.

Haitians need the work  and the assembly industry needs Haitians. They are one of the best work forces in the world, and they are less than 2 hours from the American marketplace, by air. 72 hours by boat.

The boast that we have 25,000 jobs now and hope to add 50,000 over the next four years is nothing to really boast about. We had almost 130,000 before the illegal embargo of Haiti in 1991. At this time the assembly jobs were stolen by Haiti’s OAS allies, like pirate’s plunder.  A perfectly good and prosperous industry was decimated by Haiti’s so-called friend.

Let us hope that this stupidity is not repeated in the future.

We are – however – not optimistic.

1 thought on “In Haiti, a desperate plea for jobs may be answered-Added COMMENTARY By Haitian-Truth”