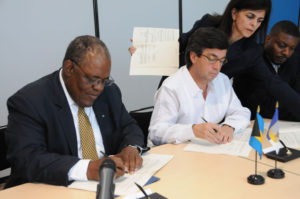 The IDB regularly participates in the Clinton Global Initiative (CGI) as part ongoing strategy to leverage Bank programs by partnering with other public and private actors. This year, the IDB’s Office of Outreach and Partnerships led a delegation to the CGI that focused on the following areas:

Working with the Haitian Government, the IDB has supported the development of a comprehensive education reform plan that is now in the early stages of implementation. At this year’s CGI, the IDB further committed to set up a platform that will facilitate the coordination and harmonization of education efforts with the public and private sector, as well as track the impact and contribution of each partner’s actions have to the overall expected outcomes.

President Moreno and several other IDB officials also worked to mobilize additional financial, non-financial and co-leveraging partnerships that will strengthen various aspects of the program.

In line the United Nations “Decade of Action for Road Safety,” the IDB is supporting the FIA Foundation to work towards safer transit in Latin America and the Caribbean, where road accident fatalities are almost double the world average, amounting to 17 deaths per 100,000. If current trends continue, fatalities could rise to 31 per 100,000 by 2020.

On Sept. 22, IDB President Moreno spoke at an event to launch the “road safety Tag,” a yellow square that is intended to become the road safety equivalent of the red ribbon for HIV/AIDS awareness or the white wristband worn in the fight against poverty. Moreno joined senior officials including UNEP Executive Director Achim Steiner, World Bank Vice President Inger Andersen and Make Roads Safe global ambassador Michelle Yeoh to unveil the Tag in the UN headquarters during the Millennium Development Goals summit.

The IDB made an initial commitment to this issue at last year’s CGI, calling on partners to identify innovative ways to reduce the number of accidents and deaths due to poor road safety. This pioneering initiative will build up the capacity of developing countries to reduce traffic injuries and fatalities and will build on and expand the IDB’s capability to deliver road safety improvements in line with the recommendations of the World Report on Road Traffic Injury prevention.

The IDB is advancing the Sports for Development program with partners such as Trilogy International, Brightstar Corporation, FIFA, Fundacion Atletico de Madrid and Streetfootballworld, with the goal of harnessing football as a vehicle for social development in Latin America and the Caribbean.

The IDB is particularly interested in using the Sports for Development program as a tool to prevent violence and empower girls and young women living in poverty in the region. The goal is to harness the power of sports to give girls that means to take control of their lives and become active and responsible members of society.

At the CGI, the IDB met with global philanthropists, development agencies, foundations, NGOs, individials and global companies to discuss concrete proposals that will advance Sports for Development programs around the world.