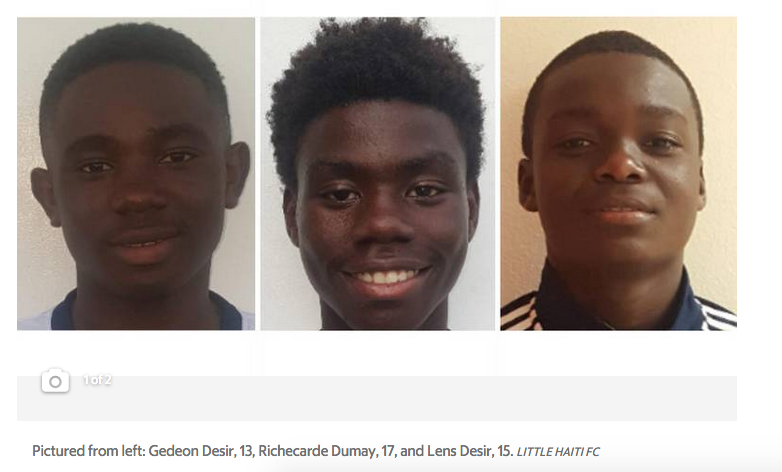 The woman who sources say crashed into three Little Haiti soccer teens,killing them on impact, acknowledged from her hospital bed early Tuesday that she was in a crash and suffered serious injuries.

North Miami police have not identified the driver of the car, citing a “pending investigation.” But the Miami Herald learned late Monday that the driver was Mariam Coulibaly, a 31-year-old exotic dancer with a suspended driver’s license who smelled of alcohol, according to sources with knowledge of the case.

“I’m very much depressed about everything going on,” Coulibaly told the Miami Herald from her intensive care bed at Aventura Hospital. “I came from a blackout. When I woke up I didn’t even know that I hurt people.”

She continued: “I shattered my chest. I had surgery on my stomach. Shattered my hip. I don’t know what’s going on. I need to let this sink in. That’s what I need. “

Coulibaly did not go into any more detail about what happened Saturday morning and did not acknowledge any deaths.

“This is terrible, especially for someone who has never been in trouble before,” she said.

She said needed to speak with her attorney before saying anything more.

Sources say Coulibaly smelled of alcohol at the scene, and that she also told medical staff she had been partying all night. Investigators estimate Coulibaly was driving around 60 miles per hour before crashing into the three teens on the corner of Northeast 13th Avenue and 125th Street.

Gedeon Desir, 13, Lens Desir, 15, and Richecarde Dumay, 17,all members of Little Haiti Football Club, a local soccer team for at-risk, low-income youth with athletic talent, died at about 5:22 a.m. Saturday.They were walking to the bus stop, eager for a long-awaited soccer tournament in Weston.

Detectives obtained a search warrant for her blood, which will be tested in the coming days, a source said. Records show Coulibaly had two misdemeanor criminal arrests in Miami-Dade: a petty theft in 2017 and marijuana possession in 2008. Both cases were dropped.

North Miami Police identified the three minors killed in the crash, but refused to confirm the name of the driver.

Coulibaly has not yet been charged.

1 thought on “‘I didn’t even know that I hurt people,’ driver says after deadly soccer-player crash”