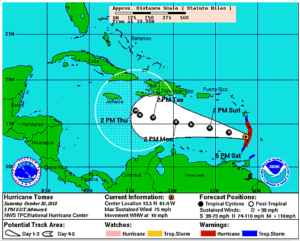 The forecast track for Tomas now shows the system slowing down considerably by Thursday and starting to turn northwest while it’s in the Caribbean southeast of Jamaica.

From there, several models predict the system will make a distinct turn back to the northeast, possibly putting Haiti or the Dominican Republic under the gun. That turn, of course, would be good for Florida but potentially catastrophic for Haiti, which remains wounded after the earthquake earlier this year.

Keep in mind: This is a long-range forecast, subject to large error, meaning that northeast turn is not assured.

Under the latest advisory, Tomas would not intensify into a major hurricane quite as soon as previously forecast, as it now is projected to strengthen into a Category 3 system on Thursday.

Until then, westerly winds and dry air should keep it in check, senior hurricane specialist Stacy Stewart said in the discussion section of the advisory.

With Tomas intensifying into the 12th hurricane of the season on Saturday, 2010 has become the fourth most hurricane prolific year on record.

1 thought on “Hurricane Tomas might put Haiti under the gun”