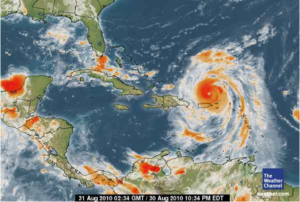 Haiti Action.net – Port au Prince, Haiti — Hurricane EARL is now a dangerous Category FOUR on the Saffir-Simpson scale. After scraping by Anguilla as a Category TWO Hurricane, EARL strengthened to a major hurricane Category THREE — 111-130mph — and headed straight for the Sombrero Lighthouse and Anegada. At 3PM the Situation Overview from the National Weather Service in Puerto Rico stated:

“Tropical storm conditions are quickly spreading across Puerto Rico with hurricane conditions across the northern U.S. Virgin Islands. squalls will become more frequent this afternoon with tropical storm force winds and heavy rains that could trigger flash flooding. Isolated tornadoes or waterspouts are possible across the Atlantic coastal waters… eastern passages and the waters surrounding the U.S. Virgin Islands and eastern Puerto Rico this afternoon.”

While almost all forecast models predict that Hurricane EARL will keep turning gradually to the right away from further landfall the National Hurricane Center in Miami (NHC) has been adjusting the forecast path, continuously, westward over the last four days as it adapts to its estimate of the western periphery of the subtropical ridge that has been steering EARL closer to Haiti than the “Computer” was predicting. The low-shear conditions to the north of EARL should allow the topical cyclone to move north and increase in strength.

As stated before, most prediction models show EARL gradually turning to the right. However, most of these models don’t seem to take into account — or at least show the possibility — the impact of the upper level trough (from 32N 48W to 26N 58W) and the close proximity of the Intertropical Convergence Zone. The BAMS (Beta and Avection Model Shallow) is beginning to show the deviation from standard. It’s likely that the more relevant BAMM track might start show similar “independent adaption.”

In recent years, Haiti has seen the most devastation from storms that were forecast similar to EARL. The BAMS model was the one that showed the divergence of the worst storms. Most notably, the lessons taught by tropical storms HANNA and Jeanne don’t seemed to have been learned by the corporate media who has been primarily interested — during the approach of EARL — in selling entertainment news rather than reporting the most relevant news on the upcoming presidential elections, let alone warning their public about impending storms.

Speaking of impending storms, NHC Forecaster Berg has just released the first forecast for Tropical Storm FIONA, which appears to be lacking enough organization to impress Berg with its outlook. The storm is now 800 miles to the east of the Windward Islands. The storm is moving forward at a fast clip, if it slows down somewhat, conditions are favorable for development into another hurricane.

We have scanned the media for hurricane information and find it loaded with garbage about Wyclef Jean and his abortive efforts to derail the earthquake recovery by stealing the spotlight!!

We experienced a devastating deluge the other night and no one commented about it.

No one commented about the chaos in the tent camps where hundreds of thousands hang on, in the hope that a hurricane will not strike.

The Haitian government makes no plans for a possible hurricane and its aftermath.

The Haitian government might as well be on the moon for all the good they are to the Nation and its citizens.