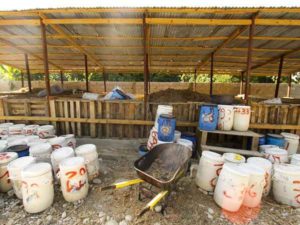 A new type of public toilet is helping people in Haiti make fertilizer from human waste, a project that may someday revive the country’s degraded farmland, curb disease, and create jobs.

Since 2006 the U.S. nonprofitSustainable Organic Integrated Livelihoods (SOIL) has been installing public toilets in Haiti, where 80 percent of the population has no access to sanitation.

Most Haitians are forced to dispose of their waste in waterways, plastic bags, or even abandoned buildings, according to SOIL. Any existing toilets are often poorly designed, with waste flushing straight into rivers or groundwater. (Related: “World Water Day Focus on Global Sewage Flood.”)

Such practices mean that human feces easily get into the water supply, which can cause waterborne diseases such as cholera, currently at epidemic levels in the country, according to the U.S. Centers for Disease Control and Prevention.

More than 6,000 people have died and 420,000 have been sickened since cholera broke out in Haiti in October 2010. (Read: “Cholera and Cooperation Play Into Haiti Reforestation.”)

“Sanitation was the most successful health intervention in the modern world,” said SOIL co-founder and soil ecologist Sasha Kramer. But in Haiti, “poop getting into water is the leading cause of death.”

So far, SOIL has installed ecological toilets in camps of more than 20,000 people left homeless by the 2010 earthquake in Port-au-Prince. Facilities are also being supplied to 30 communities in northern Haiti. (See “Haiti Earthquake Anniversary: Pictures Show Slow Recovery.”)

But these aren’t just any toilets: Kramer and her colleagues constructed urine-diverting toilets, a type of ecological sanitation in which urine and feces are separated. The waste is then covered with a dry material to aid decomposition and is regularly collected.

“With seven billion people on the planet as of this week,” Kramer said, “technologies like this are more and more important for addressing the basic rights of a growing population and reducing the negative impact on the earth’s ecological systems.”

From Waste to Valuable Soil

Once a week SOIL workers drive through communities in a flatbed truck called the Poopmobile, collecting the toilet drums and replacing them with clean ones

The waste is then taken to a composting site outside the city, where workers mix the material with sugarcane bagas—a byproduct of making rum—to speed up the composting cycle.

Workers check the compost temperature every two days, and “by the end of eight months, [we] end up with incredibly nutrient-rich soil,” Kramer said. Human waste may even be better than cow feces for compost, she added, since our meatier diets contain more plant-boosting nitrogen.

(Test your knowledge of soil.)

When composted properly to kill pathogens, human waste is a “very rich nutrient source that’s quite suitable for growing crops for human consumption,” saidSerita Frey, a soil microbial ecologist at the University of New Hampshire in Durham.

“In the West, we’re quite squeamish about use of human waste in general as a fertilizer,” Frey said, but “throughout history it’s been used in Asia and other parts of the world as a soil amendment.”

Adding compost to farmland can also improve soil structure and stability, both crucial for preventing erosion, added Frey, who is not affiliated with SOIL.

That’s because, as bacteria and fungi decompose the material, they produce sticky glues that bind soil particles together to form stable clumps, she said. (See soil pictures.)

So far, the Haitian toilet project has yielded more than 100,000 gallons (400,000 liters) of compost, some of which is already being applied to experimental gardens and crops, Kramer said.

Some of these gardens are producing vegetables that provide food for residents in Cité Soleil, an extremely poor, densely populated area near Port-au-Prince, said Daniel Tillias, a Haitian community organizer for the peace group Pax Christi Haiti.

The rich compost could eventually be used to grow crops and replant trees across the impoverished Caribbean country, where decades of land overuse and deforestation have stripped soils of nutrients and led to widespread erosion.

(Read about the decline of Haitian soil in National Geographic magazine.)

“We can use something that was useless as a wonderful opportunity,” said Tillias, who has volunteered with SOIL and acted as a narrator for an independent film on the project, called Holy Crap! (Watch a video clip from the film on National Geographic’s website.)

“It’s a very good circle—it’s a good, positive thing for this neighborhood.”

Tillias said most people he has worked with have had positive reactions to the toilets, which do not smell. The only negative, he added, is that the facilities are often too popular and can get overcrowded.

With “a little funding that SOIL provided, [we can] give a very acceptable wage that many people wanted to have,” he said.

Beyond providing jobs, however, “the question would be, what is the level of local and community buy-in into the process?” asked Haitian-born Alix Cantave, co-founder of the Haitian Studies Association at the University of Massachusetts in Boston.

Though projects such as SOIL’s are well intended, “what we have seen over the past 40 years, with all the investment that’s been put into Haiti, [there’s] very little to show for it,” Cantave said.

That’s mainly because international organizations often fail to build relationships with local entities, and when funding dries up, so does the project.

To make a new sanitation initiative last long-term in Haiti, Cantave said, a municipality where the toilets are installed would have to develop a unit within its government office to take on and manage the project.

“You’re supporting, not leading,” he said. That’s when “people are engaged, then they can take control and they can own the process.”

SOIL’s Kramer already recognizes this. In “countries that have good sanitation systems, it’s never an international organization that’s put them in,” she said.

“It has to be something that comes within the country, because it requires so much ongoing maintenance.”

To that end, SOIL has a plan: Come up with a solid design for a composting toilet that would work in households and thus get the project going on a small scale in about a hundred Haitian homes.

“I could see a model where private businesses provide collection services and the government is either involved in … running the compost site or purchasing the compost,” she said.

For example, Haiti’s “Ministry of Agriculture would purchase the compost and resell to farmers at a subsidized price they could afford.”

Then SOIL “would not do any more implementing—[we’d] do more consulting.”

Community organizer Tillias also believes there could be a big economic opportunity not only for the owners of the toilets but for all Haitians, who can produce compost for local farmers and even export any extra to other countries.

In this way, he said, Haiti “could be the country giving the example to the whole world.”