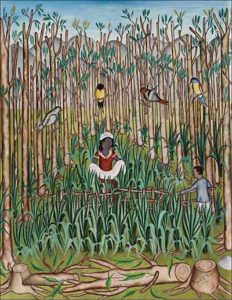 For the past 500 years, Haiti has been part of the world’s history. As a member of the society of nations, Haiti and Haitians have made numerous, worthy, but rarely heralded, contributions. Need we mention the bravery of the future heroes of our Independence, who fought in Savannah under the banner of the French Army to help defeat the English Colonial forces and help free the United States of America?

Need we mention the foundation of the city of Chicago by Jean-Baptiste Point du Sable, a Haitian born fur trader?

Need we mention the assistance provided to Simon Bolivar by Petion in the form of safe haven when his life was threatened, monetary support, tactical advice and even the provision of manpower to bolster his army?

Need we mention the generous contribution of all the Haitian teachers who responded to the call of our ancestors’ land in the days that followed the massive movement of African decolonization in the 1970s, when all these newly created nations were “dropped” by their former colonizers.

The list goes on and on. However, the greatest contribution of all is an intellectual one.

Indeed, Haiti is one of the most vibrant and productive nation within the francophone community, when it comes to literary creation. Haitian writers, such as Dany Laferriere, are often called upon to represent Canada at the International Book Fairs in Paris. Novelists such as Jacques Roumain have been translated in more than 20 languages and read all over the world.

When it comes to music, the Haitian influence has also been enormous. Throughout the history of the new world, it is undeniable that Haitian rhythms and compositions have impacted on both Latin and Caribbean music, particularly Cuban, Guadeloupean and Dominican, but this contribution has seldom been acknowledged.

The astute student of our music will remember that among others, Guy Durosier and Raoul Guillaume’s song, “Ma Brune” has been translated into Spanish as “Morena” and interpreted by many South American artists. Certainly, it gives us a sense of pride to see how some of our musical creations are appreciated abroad.

However, it is painful when one of our most celebrated meringue is   hijacked, without giving credit to its original composer.

As a child growing up in Haiti, I remember being rocked to sleep by my mother to the beautiful tune of Choucoune.

El Maestro Issa El Saieh performing “Choucoune” composed by Michel Mauleart Monton with lyrics from a poem by Oswald Durand. This song is also known as “Ti Zwazo.” It was later translated into the english “Yellow Bird.”

This slow meringue, perhaps more than any other, has been interpreted by most Haitian choirs, orchestras, bands or ensemble. never thought that any single Haitian would doubt that this song is ours, belongs to us and to none other.
However, this tune has become better known with the lyrics of “Yellow Bird” than those of “Choucoune”.If you ask a Jamaican, he will have no hesitation in answering that it is a Jamaican song.

Young Haitian Americans surveyed recently were not sure whether it was a Jamaican song translated in Creole or a Haitian song translated in English. Even the German-Haitian artist Cornelia Schutt, also known as Ti Corn, in her CD “Caribbean Ballads” (1991-Gema), sings Yellow Bird and lists it as “traditional”.

My frustration growing, I went on the internet to look for the name of the composer of “Choucoune”. Both AskJeeves.com and Google had no match for the question. I contacted numerous music stores in an attempt to procure a copy of the scores of the Choucoune. No luck. I went on e-Bay, hoping to be able to buy perhaps an old sheet music, with the scores of “Choucoune”. There again, no luck. I decided therefore to search “Yellow Bird”. On the first try on AskJeeves.com, there it was: Yellow Bird’s music was composed in the 1960s by Norman Luboff and the lyrics written by Alan and Marilyn Keith Bergman.

It had become clear to me that we were facing a case of “stolen legacy”, to use an _expression rendered popular by James Richardson, who described how the glorious Egyptian tradition was falsely attributed to the Greeks by the eurocentric scolars. Did this happen because we Haitians fail to study our own history and to teach it to our children?

What is the true story of “Choucoune”?

Believe it or not, Choucoune was a real person. Her real name was Marie Noel Belizaire. She was born in the Village of La-Plaine-du-Nord in the year 1853.

Although her parents are not commonly known, it is reported that Ms.Belizaire had two sisters. Unlike her sisters, she was strikingly beautiful and she was given the nickname of Choucoune. She was dark-skinned, but her long hair was straight, defining the type “marabou”, commonly used in the Haitian vernacular.

Before she could finish her elementary classes, she fell in love with a young man, named Pierre Theodore. The two became involved in a common-law marriage. To support her family, she started a small business, detailing various articles of daily necessity.

Soon however, Choucoune realized that the young man was unfaithful.

She left the village and moved to Cap-Haitien, the capital of the Northern Province of Haiti. She resided at 14, Simon Street (Rue Simon) in the neighborhood of Petite-Guinee. She established a small restaurant near the Chapel of St-Joseph, located on 19th Street (Rue 19).

One of her customers may have been one Oswald Durand, famous poet in those days in Cap-Haitien. He was 13 years older than Choucoune. Nevertheless a romantic relationship was quick to start between the two. They seemed to have enjoyed quite a few blissful moments. Those moments unfortunately were short, because Oswald Durand was a known womanizer and often described himself as “the gardener that waters all the flowers”.

Choucoune was looking for a more stable relationship and moved on.

Shortly thereafter, Oswald Durand was thrown in jail for having criticized some of the political leaders in Cap-Haitien. While sitting in his cell, a bird alit on his window and Durand composed one of the most beautiful Haitian poems, written in Creole. Its title was: Choucoune and the year was 1883.

In it, the poet talks of Choucoune’s beauty, of their happy moments and of the pain of their separation, when Choucoune preferred a young French man over him. Choucoune never returned to Durand, despite the fact that he truly immortalized her. She kept looking for the perfect love that never came. She fell on hard times in the later part of her life and returned to her native village.

She became insane and had to beg for survival.

My mother who as a child, used to go to the celebration of Saint James in La-Plaine-du-Nord told me that people would point to the fallen beauty, whispering : “Here is Choucoune! Look at Choucoune!”

Durand’s poem was considered the best poem written in creole and 10 years later, it attracted a young musician by the name of Michel Mauleart Monton.

Mauleart was born in New Orleans, Louisiana of a Haitian father and an American mother. His father’s name was Milien Monton and he was a tailor. For unknown reasons, he was raised in Haiti by his older sister, Odila Monton, who owned a store on Rue du Magazin de l’Etat, in Port-au-Prince. He took music lessons from Mr. Toureau Lechaud and learned how to play the piano.

Under the spell of the rich tropical nature, the surreal and magical world of Haitian religion and the classical European musical tradition, Mauleart combined these influences to compose numerous pieces that were celebrated in his days but that are not commonly known nowadays. They included: La polka des tailleurs (The tailors polka), L’amour et l’argent(Love and Money), P’tit Pierre(Little Peter), Les P’tits suye pye du jeudi (The Thursdays’ dance parties) and many others.

However, he is most famous for putting in music Oswald Durand’s poem, Choucoune. It was first performed in public in Port-au-Prince on May 14, 1893.

Choucoune was an instant success both in Haiti and abroad.

Later on, it was prominently featured during the festivities that marked the celebration of the Bicentennial of Port-au-Prince, in 1949.

At that time, Haiti was the main tourist attraction of the Caribbean. The noted visitors of the island included celebrities like Marian Anderson, Harry Belafonte, Elizabeth Taylor and many others. Who first fell in love with the slow meringue of Choucoune? We will never know. Let’s just say that in the 1950s, a composer named Norman Luboff heard the song and adapted the melody to new lyrics written by two songwriters, Alan and Marilyn Keith Bergman.

The lyrics were also inspired from Durand’s song and Ti Zwezo (little bird in creole) became Yellow Bird. The song appeared on the Norman Luboff Choir’s Calypso Holiday LP album in 1957, described on the cover as a “serenade of a lonesome lover to an equally lonesome bird.”

The new version of the song gained quickly in popularity and became an easy listening favorite across the United States. Many artists recorded it on a dozen of singles and as the main title on albums by the Mills Brothers, Roger Williams and Lawrence Welk. Today, the song is performed by every steel band and is a favorite request of tourists on cruises or vacationing in the Caribbean islands, without knowing that it all started in 1883, in a Haitian jail. Next time, you hear Yellow Bird, think of Choucoune and Oswald and tell every one proudly that they are singing a Haitian song.

For those of our readers who sing or play a musical instrument, we are happy to provide the score and the lyrics of Choucoune with credit given to lyricist, composer and arranger.