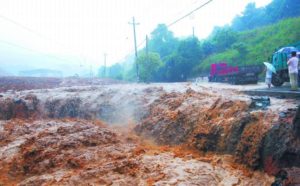 Last Updated: 13:49 IST(7/6/2011) At least seventeen people were dead on Tuesday after torrential rains slammed the Haitian capital, turning roads to rivers, collapsing fragile houses and swamping the city’s squalid camps set up after last year’s earthquake. The worst rains to hit the impoverished country so far this year, at the start

of the hurricane season, paralyzed the city, with three people killed in the upscale neighborhood of Petitionville, Yolaine Surena of Haiti’s Civil Protection Agency (DPC) said.

The deaths were attributed to collapsing houses amid the downpour that began on Monday evening.

Two people also died as rushing waters soaked the downtown tent camp near the ruined presidential palace, and two children were killed in the neighborhood of Christ-roi after their home collapsed, Surena said.

Newly elected President Michel Martelly said that he was en route to the city’s most impoverished neighborhood Cite Soleil, which officials said that was completely swamped by the rainfall.

“I was in the streets during the rain, and I got home, put my boots on, and I’m back in the streets to assess the situation,” Martelly said in remarks broadcast on national television.

“I’m now trying to help people, and distribute some food. I hope people can find shelter,” said Martelly, who was with members of his new cabinet as he handed out supplies.

The rains had meanwhile brought the entire city to a virtual standstill as waters ran through streets and cars were jammed up in long lines, some abandoned by their owners.

Thunderstorms were washing across north Carribean islands on early Tuesday, but with little chance of the large low pressure area developing into a cyclone, according to the US-based National Hurricane Center (NHC).

The associated rainfall, warned the NHC, “could cause flash floods and mud slides over portions of Haiti, the Dominican Republic, Jamaica and Cuba.

In Jamaica, the national Meteorological Service issued flash flood warnings for low-lying and areas of Kingston and surrounding towns.

Haitians face some of the stiffest challenges to the strong weather in the region, however, due to the country’s crumbling infrastructure and precarious shelters for thousands who have been living rough in the capital since the disastrous 7.0 magnitude earthquake in January 2010.

Heavy rains are set to impact many here as hurricane season just begins, amid fears of health officials who warn against an uptick in fatalities from a cholera outbreak that first broke out in October last year.

That toll has however been significantly downgraded in recent weeks by a not-yet released USAID-commissioned report, which contends between 46,000 and 85,000 people were killed in the quake.