“I am leaving the post of prime minister this evening with a feeling of accomplishment,” Laurent Lamothe said in a televised address.

Protesters had called for President Michel Martelly and Mr Lamothe to resign.

Mr Martelly was to have called polls in 2011, but they were postponed in a stalemate over electoral law.

Opposition politicians accuse President Martelly of wanting to rule by decree and that legislation that would authorise the vote unfairly favours the government. 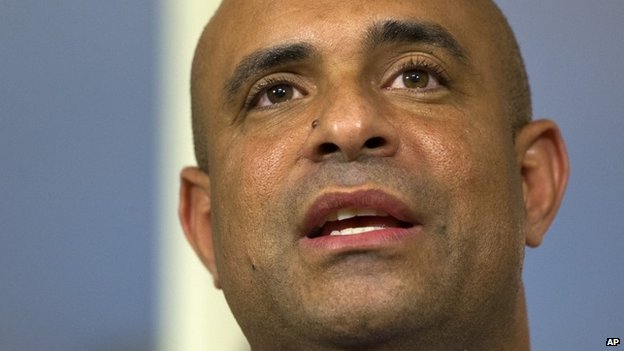 Mr Lamothe had been prime minister since 2012

Parliament’s mandate expires in January, and unless elections are held, Mr Martelly would rule by decree.

A commission set up to break the stalemate said on Friday that Mr Lamothe should resign, along with the head of the Supreme Court and the country’s election commission.

Mr Martelly said earlier that the accepted the commission’s findings, and would meet government officials on Monday to discuss them.

Haiti is also still struggling to recover from a devastating 2010 earthquake.

COMMENT: HAITIAN-TRUTH.ORG
This BBC article has a picture that really doesn’t show anything, other than a burning tire.

So it was with the reported protests.

A few agitators burning tires, throwing rocks, breaking car windows.
Not really a protest against anything.

Prime Minister Lamothe’s government was seen as a threat to President Martelly’s in-laws, specifically Kiko St. Remy who could be arrested by DEA operative, in the near future.

Haiti’s 10,000,000 citizens will suffer because of this stupidity initiated by a handful of Haitians with their own agenda.

The game has just started with the next step – President Martelly’s removal.
Wait and see.