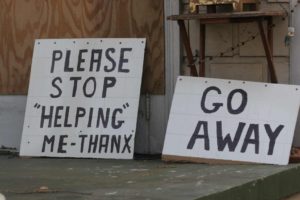 On October 14, the U.N. Security Council voted to renew the mandate of the United Nations Stabilization Mission in Haiti (MINUSTAH), paving the way for the peacekeeping force’s eighth year of operations in the Caribbean nation. The unanimous decision was made with little discussion of allegations that peacekeepers in Haiti have committed serious abuses, including sexual assault, killing protestors and complicity in forced evictions. Amid widespread distrust of MINUSTAH, which is backed and financed in large part by the U.S. government, a growing number of Haitian and international organizations are calling for the withdrawal of the U.N. force and an end to the militarization of Haiti’s reconstruction.

While the Security Council also authorized a reduction in the force’s size from 13,000 troops and police to about 10,500, Beverly Keene of Jubilee South (a global network of anti-debt movements) told In These Times that the decision “does not respond in any way to the need to confront the reality of an occupying force.” Haiti is the only country in the world where a peacekeeping mission operates under a U.N. Chapter VII mandate—permitting it to use force—absent an active conflict or an enforceable peace agreement. Critics argue that MINUSTAH, which began in 2004 following the U.S.-backed overthrow of President Jean Bertrand Aristide, violates Haitian sovereignty.

Jubilee South is currently calling for the force’s withdrawal as part of its “Haiti No MINUSTAH” campaign, which has been endorsed by Nobel Peace Prize laureates Perez Esquivel, Mairead Corrigan Maguire and Betty Williams, as well as School of the Americas Watch and hundreds of organizations in the troop-contributing countries of Argentina, Brazil and Uruguay, among others.

In a recent survey of perspectives on MINUSTAH in Port-au-Prince, 65 percent of respondents wanted the force to leave immediately or within the next year. A large majority was also skeptical of the force’s accountability, a likely testament to incidents that have occurred since the mission’s arrival in 2004.

In 2005, MINUSTAH raids into the impoverished community of Cite Soleil led to the deaths of between 25 and 30 civilians, according to human rights observers on the ground (the U.N. disputes the number of dead and claims victims were gang members). In several incidents, peacekeepers’ use of tear gas, rubber bullets and firearms to break up anti-U.N. demonstrations led to the death and injury of protesters. The apparent rape of an 18-year-old man by Uruguayan peacekeepers—caught on video and circulated widely in September—sparked fresh outrage.

While this latest incident has become the subject of internal investigation, U.N. peacekeepers are typically granted broad immunity from criminal prosecution in the country where they operate. In Haiti, the issue of U.N. accountability is particularly contentious given evidence that the country’s cholera epidemic, which has killed more than 6,000 Haitians since October 2010, originated with U.N. peacekeepers who dumped sewage into the Artibonite river. Haitian organizations have called for reparations to victims and a redirection of MINUSTAH’s nearly $800 million annual budget toward funding for cholera prevention.

Responding to calls for withdrawal, MINUSTAH spokesperson Sylvie Van Den Wildenberg told In These Times that in order for Haiti to become a fully functioning democratic state, MINUSTAH needs to continue building the country’s institutions. But a recent report from the group Harvard HealthRoots charges that MINUSTAH failed in its mandate to support the democratic process when, despite being charged with monitoring the 2010 national elections, it raised no objections to the exclusion of the country’s most popular political party.

The United States was instrumental in backing and financing these elections. A series of diplomatic cables released by WikiLeaks reveal MINUSTAH’s role in advancing U.S. interests within Haiti and the region. MINUSTAH is described in a 2008 cable from the U.S. embassy in Port-au-Prince as a way to develop “habits of security cooperation in the hemisphere that will serve our interests for years to come.” Keene explains that the “Haiti No MINUSTAH” campaign seeks to oppose Haiti “being used as a laboratory for new forms of intervention and control” in Latin America, noting that Brazilian soldiers returning from Haiti are already being used for pacification programs in the slums of Rio de Janeiro.

“The biggest forms of violence that people are experiencing in Haiti are structural,” argues Daniel Beeton, a policy analyst at the Center for Economic and Policy Research who recently returned from a human rights delegation to Haiti. “That’s how MINUSTAH could help—if instead of having an armed force, the U.N. were to take that money and invest it in ways to help Haiti recover.”

Rebecca Burns holds an M.A. from the Kroc Institute for International Peace Studies, where her research focused on global land and housing rights. She currently serves as a research assistant for a project examining violence against humanitarian aid workers, and is an In These Times editorial intern.