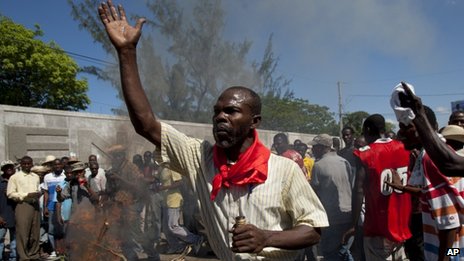 Hundreds of people in Haiti have protested against the high cost of living and called for the resignation of President Michel Martelly.

In a march through the capital, Port-au-Prince, opposition supporters and other demonstrators accused the president of corruption.

They also said he had failed to deliver on his promises to alleviate poverty.

Haiti – which shares the Caribbean island of Hispaniola with the Dominican Republic – is one of the poorest countries in the western hemisphere.

The former pop star vowed to bridge the gap between Haiti’s tragic past with the aspirations of a new generation.

“Martelly is wasting the meagre resources of the country,” said Edner Rosier, one of the organisers of the protest.

His government had also promised to cover the costs of school tuition, a measure which would have helped the country’s poorest, the opposition says.

Mr Martelly’s government says it is addressing the problem of high living costs.

A commission was set up last month to work out measures to curb the cost of food and other essentials.

The opposition says it has planned other demonstrations across Haiti for the next days.

On Friday, the United Nations renewed the mandate of its peacekeeping force in the country, but decided to cut its size.

The force became hugely unpopular after an outbreak of cholera, which Haitians said blamed on foreign peacekeepers.

The epidemic killed more than 7,000 people in the Caribbean country