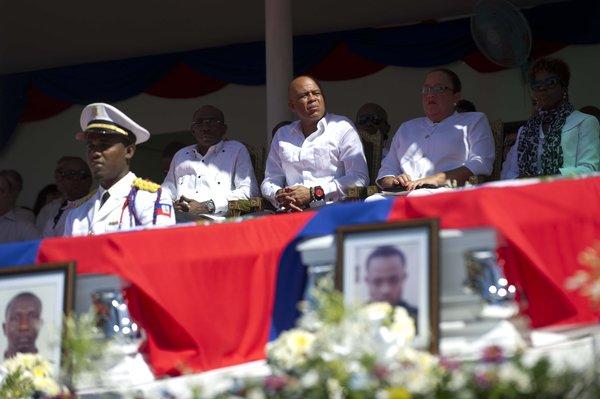 PORT-AU-PRINCE, Haiti — With a brisk clap of his hands, Michel Martelly summed up the first steps he would take if he ever left the music business and became the president of Haiti.

“First thing, after I establish my power, which would be very strong and necessary, I would close that congress thing,” Mr. Martelly was quoted as saying in 1997, when he was still a hugely popular singer. “Out of my way.”

His words have proven prophetic. A political crisis almost four years into Mr. Martelly’s presidency gave life to the fantasy he once described: He is now running the country without the checks and balances of a parliament.

After Mr. Martelly and his opponents in Parliament could not agree on elections, most legislative terms expired, and the seats remain empty. Only 11 elected officials remain in the entire country, and the president is one of them.

For two months, Mr. Martelly has governed Haiti by executive order, concentrating power in the hands of a man who, his critics say, is a prisoner of his past, surrounded by a network of friends and aides who have been arrested on charges of rape, murder, drug trafficking and kidnapping. 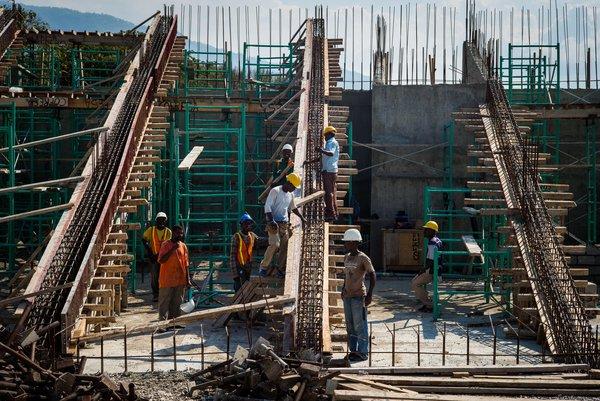 Workers rebuilding a performance hall in the center of Port-au-Prince. Haiti now has one of the fastest-growing economies in the Caribbean, thanks largely to infrastructure projects, but 24 percent of Haitians still live in extreme poverty. Credit Ian Willms for The New York Times

As Mr. Martelly strengthens his hold on power, scandals involving those close to him have continued to mount, raising questions about the president’s ability to lead.

One of Mr. Martelly’s senior advisers was jailed for six months during the president’s tenure after being accused of killing a man in a gunfight at the Dominican border. Another friend of the president vanished last year, shortly after being released from jail in a marijuana trafficking case. The prosecutor in that case fled the country fearing retaliation.

Yet another of the president’s associates is in jail, accused of running a kidnapping ring. The authorities are trying to determine whether the man, Woodley Ethéart, who said he worked at the Ministry of Interior, laundered ransom money through a lucrative catering contract at the presidential palace, an investigator familiar with the case said.

One longtime law enforcement official said he stopped going to events at the palace because he kept running into people who had been arrested on charges as serious as murder but were now working at the presidential offices as security guards.

“There they were, in the palace, carrying automatic weapons,” the official said under the condition that his name not be published out of safety concerns.

The Martelly administration’s influence has been criticized most for its effect on the judiciary, where the criminal cases of some people close to the president have stalled or disappeared.

Prosecutors who objected to the administration’s interference were fired or fled, and one judge who complained that the president had meddled in a civil corruption case against the first lady died two days later.

“I would be very concerned of this interconnected web of nefarious characters,” said Robert Maguire, a Haiti scholar at George Washington University. “Martelly has empowered them to do what they do. He has established an environment of corruption, abuse of power and impunity.”

Mr. Martelly’s allies defended him, saying that the president could not be blamed for the actions of his friends. Several said that he is loyal to a fault, and that he will stand beside old friends no matter what trouble they find themselves in. The president, aides said, wants the best for Haiti but is easily influenced by relatives known for ties to drug trafficking and friends who abuse their proximity to power.

One of those relatives, the president’s brother-in-law Charles Saint-Rémy, said the president and his family had been victims of a politically motivated campaign to discredit them.

“We have had stability for four years,” said Daniel Edwin Zenny, a senator allied with the president. “We used to have 10,000 to 20,000 people protesting on the streets every day. Now we have 1,500 to 4,000, and while they are protesting, the country is moving forward. This is not a big situation yet.”

Mr. Martelly was elected in 2011 after being placed in a runoff despite coming in third in a disputed election. International organizations, with an assist from Washington, helped Mr. Martelly by documenting his opponents’ widespread voter fraud.

Washington’s role in the election and the American ambassador’s warm relationship with him since has hurt Mr. Martelly’s credibility at home, where the president is considered a member of the conservative elite, disconnected from the poor majority.

Still, he is credited with getting the vast majority of residents who lost their homes to the devastating 2010 earthquake out of tent cities. Solar panels light once-darkened streets, and government ministries and hotels are being built. An anticorruption law was enacted, and the president found creative ways to enroll more children in primary school.

The rubble that marred the streets after the earthquake is gone, and so are most of the tents that 1.5 million Haitians lived in, packing parks, road dividers and other corners of open space.

Haiti now has one of the fastest-growing economies in the Caribbean, thanks largely to infrastructure projects financed by the money Haiti saved by buying oil at preferential terms from Venezuela. But even with that growth, and the billions in international aid, 24 percent of Haitians still live in extreme poverty, according to the World Bank.

“Construction is, like, for certain people — rich people. They built new banks, they built new hotels and government buildings,” said Jean François, 52, a father of six who has lived in a hillside tent here for five years. “The government officials drive by this hill every day, but they don’t see us.”

Now that Mr. Martelly can organize elections without consulting opponents in Parliament, it will soon be voting time again. A movement to oust the president appears to be losing steam. A general strike organized by opposition parties in recent days mostly flopped.  said Nicole Phillips, a lawyer for the Institute for Justice and Democracy in Haiti, arguing that Mr. Martelly’s administration improved infrastructure and built hotels, but also cracked down on rights activists and manipulated the judiciary to benefit the president’s associates. “They have taken one step forward, but mostly taken two steps back.”

Mr. Martelly’s last prime minister, Laurent Lamothe, was seen by many as cracking down on kidnapping and organized crime. But Mr. Lamothe was pushed out in December as the political crisis between the administration and opposition parties reached its peak.

Among those who protested in the streets demanding Mr. Lamothe’s ouster was Mr. Saint-Rémy, the first lady’s brother, who admits that he sold drugs in his youth but now functions as an unofficial adviser to the president. Mr. Saint-Rémy was furious over the arrest of Mr. Ethéart, who operates an expensive French restaurant known to be one of the president’s favorite hangouts — but who has also been identified by the Haitian National Police as being the leader of Galil, a gang of kidnappers.

Mr. Saint-Rémy started calling senior government officials to plead for his friend’s release, three people close to the administration said. Simon Desras, who was president of Haiti’s Senate during the political crisis, said that one of the recipients told him he considered the call more a threat than request.

Mr. Saint-Rémy admitted “having discussions” with senior officials about the case, because he remains firmly convinced that his friend is innocent and was set up by the politically ambitious former prime minister, Mr. Lamothe, in an effort to discredit the president.

“Laurent has been playing heavy politics, because he has always wanted to be the only player standing,” Mr. Saint-Rémy said.

Charles “Kiko” St Remy was about to be arrested for drug trafficking, in cooperation with American authorities. Some say that Sophia’s friend, Ambassador Pamela White, warned Sophia of this and “Kiko” launched a wave of street protests that eventually saw Michel Martelly abandon his close friend, and political ally after a lot of pressure from his wife, Sophia.

For what it’s worth Woodley Ethéart, also known as La Familia, is on the DEA’s list as a major trafficker. Of course, they could be wrong. He is recognized, locally, as head of a kidnap gang.

Laurent Lamothe was the one connection with reality, and the outside world, capable of dealing with the International Community on an equal basis. Unfortunately, for Lamothe, he was strongly anti-drug and this is not a good character trait in a Narco State.

Much of the Martelly team’s incompetence, greed, and illegal activities, were tolerated in the belief that the Martelly government would transition into a Lamothe Government.

Now this hope declines as Queen Sophia, and her band of criminals, work to block Lamothe’s participation in the salvation of Haiti, and its people.
Ambassador Pamela White is no longer seen as an unbiased mediator. Ambassador White is now perceived as an open member of the Martelly Cabal.
Time for the State Department to take note before another huge scandal hits them.

Send in a new team before it is too late.