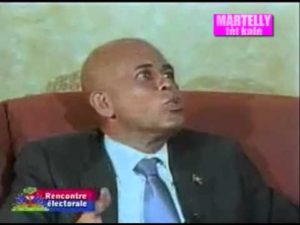 Martelly, who was welcomed at the Havana international airport Jose Marti by Deputy Foreign Minister Rogelio Sierra, said his journey to Cuba was aimed at strengthening friendship and cooperation with Cuba.

At the airport, the president also expressed his solidarity with and support for Cuban victims of hurricane Sandy, which also hit his country.

“We share their sorrow and we have thought about them,” Martelly said.

According to Haitian diplomatic sources, during his visit, Martelly will sign seven collaboration agreements in areas of health, education, agriculture and technological support.

He will also pay tribute to Cuba’s national hero Jose Marti, and meet with local officials on collaboration strategy.

Cuba has been cooperating with Haiti in the health sphere since 2001. However, following the devastating earthquake in January 2010 and the ensuing cholera epidemic, over 1,250 Cuban health staff have been assisting in Haiti.

Both countries maintain close ties in education and currently about 400 Haitians are studying in Cuba.

Cuba and Haiti established diplomatic relations in 1904, but after the triumph of the socialist revolution in 1959 Havana broke off relations with the Duvalier dictatorship, and resumed ties in 1996.