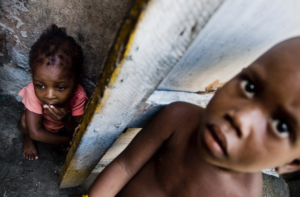 PORT-AU-PRINCE, Haiti — Haiti has handed U.S. officials six orphans its police seized over the weekend as they were about to board a plane for the United States, a top Haitian official said Tuesday.

Social Welfare agency chief Jeanne Bernard Pierre would not say exactly when her office transferred the children to the U.S. Embassy, and officials there did not return calls seeking confirmation.

A spokeswoman for U.S. Sen. Amy Klobuchar of Minnesota, who intervened on behalf of the four women trying to escort the orphans out of Haiti, said the children were cleared to depart Haiti by all the required government agencies.

The spokeswoman, Erikka Knuti, also said she expected the group to leave on Tuesday.

The children, ages 1 to 5, were seized by police Saturday after an angry crowd accosted the women escorting them at the airport of earthquake-ravaged Port-au-Prince.

Their seizure – despite apparently complete legal paperwork – comes as many Haitians fear that foreigners are exploiting post-earthquake chaos to illegally take children from the country.

The perception was fueled by an ongoing case involving 10 U.S. Baptist missionaries who were stopped while trying to take 33 children across the border without permission of Haitian officials.

The six children halted on Saturday came from the Children of The Promise orphanage in the northern city of Cap-Haitien and were bound for Miami, where adoptive parents were waiting for them.

As they emerged from taxis at the airport terminal accompanied by four women, a group of about 20 Haitian men accosted them, blocked their path and called police, said adoptive mother Sarah Thacker of Fergus Falls, Minnesota.

“It was by far the scariest moment of my life,” Thacker told the AP. “It was just automatic screaming, ‘You can’t take our children!”‘

A U.S. Embassy official bearing documents signed by Haiti’s prime minister – which are required to take children out of the country and get them through U.S. immigration in Miami – arrived late, after the group was in police custody, said Stephanie Anderson of Homer, Alaska, one of the escorts.

The women were all detained by police but released several hours later from a nearby police station after U.S. diplomats intervened.

A U.S. official, speaking on condition of anonymity because of the matter’s sensitivity, said the Children of The Promise snag has held up the departure to the United States of 50 Haitian orphans, all with their papers in order.

The six children, most under age 2, were taken to a government orphanage – a tent at a refugee camp – and slept on the ground in a tent, said Anderson.

“The smallest one has diarrhea,” said Maria O’Donovan, the Haiti field director of the orphanage where the children originated. “He looks like he’s becoming dehydrated.”

The incident occurred after 10 Baptists were arrested trying to take 33 Haitian children across the border to the Dominican Republic without the proper paperwork.

The missionaries said the children were orphaned in the devastating Jan. 12 earthquake, but the AP established that all had parents who willingly gave their children up in hopes they would get an education and a better life.

A judge released eight of the missionaries last week, but leader Laura Silsby, 40, and her assistant, Charisa Coulter, 24, remain jailed as the investigating judge interviewed officials at the orphanages the two visited before the quake.

Judge Bernard Saint-Vil told the AP on Tuesday before meeting with the two women that he must interview several more witnesses from outside the capital before deciding whether to release them.

He said that could take most of the week.

Bonnema said all the orphans in the Children of The Promise orphanage “have been in our care since they were infants.”

She said most are “true orphans or they’ve been abandoned.”

UNICEF says Haiti had some 380,000 orphans prior to the quake – nearly 4 per cent of its population – though an estimated half were not true orphans. Child trafficking is a major problem.

After the quake, the government halted all adoptions by foreigners that had not been approved beforehand – and said children only could leave the country with papers signed by Bellerive.

“The Haitian police didn’t believe that it was the Haitian prime minister’s signature,” she said.