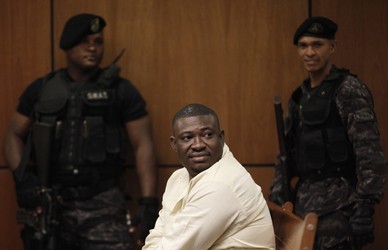 Intelligence sources report that Duclona gave up a number of key government officials, including President Preval himself. Duclona was a key Preval enforcer who killed on command. He murdered French Consul Paul Henri Mourral and several others over a period of years.  When   President Preval, and his criminal conspirators, substituted used instead of new equipment in a $100,000,000 deal, a member of the Public Works staff refused to sign the documentation. Duclona killed this mn for Preval. When things got dangerous, Duclona went to his in Preval’s Sister’s house until Jude Celestin, boyfriend of Preval’s daughter, acquired a false passport for him.

Duclona went into hiding in the Dominican Repulic. Funds were forwarded to him via Western Union. Receipts sho the money came from the President’s office, the prime minister’ office….etc.

The French Ambassador promised to have Preval’s head for the crimes.