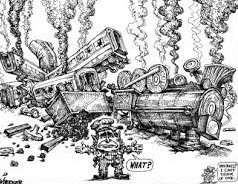 Schools with classes of 80 students, parents unable to afford even modest fees, thousands of unqualified teachers — as students in Haiti return to school, the country’s badly underfunded education system seems headed for a failing grade.

In a public elementary school in Petionville, many desks remain empty. “Parents have no means to pay,” said teacher Lionel Fevilien. “They’ll come in later this month, in October or even in January.”

Haitian law sets the fee for public schooling at 1,000 gourdes ($16) a year, but the cost of a uniform, shoes and school supplies is simply beyond the reach of many parents.

In a neighboring high school, two schoolgirls quickly comply when the assistant principal orders them to remove colorful ribbons from their hair, a violation of the school’s strict rules. The girls know that a spot in the private school is a precious thing.

“Many parents are desperate because they can’t find a place for their kids in the public schools,” says Principal Jean-Marc Charles.

Haitian law sets the fee for public schooling at 1,000 gourdes ($16) a year, but the cost of a uniform, shoes and school supplies is simply beyond the reach of many parents

At the morning flag-raising ceremony, a daily tradition in Haitian schools, the courtyard is packed: 4,000 students attend the school, in two shifts.

“On average we have 60 to 70 students per class,” with 80 in the upper grades, Charles said apologetically.

“Haiti’s education system today is like the system of a country at war,” said Nesmy Manigat, national education minister from 2014 to 2016.

This fall some 400,000 students will be unable to return to school because of economic problems or the lack of space, said Manigat, who heads a committee at the Global Partnership for Education.

He said 80 percent of teachers lack proper training. “We can’t keep recruiting people who are not qualified.”

Only three of every 100 elementary school students will graduate high school without having to repeat a year or dropping out.

In July, two-thirds of Haitian students failed their baccalaureate exams. That compares to a nearly 90 percent passage rate in France.