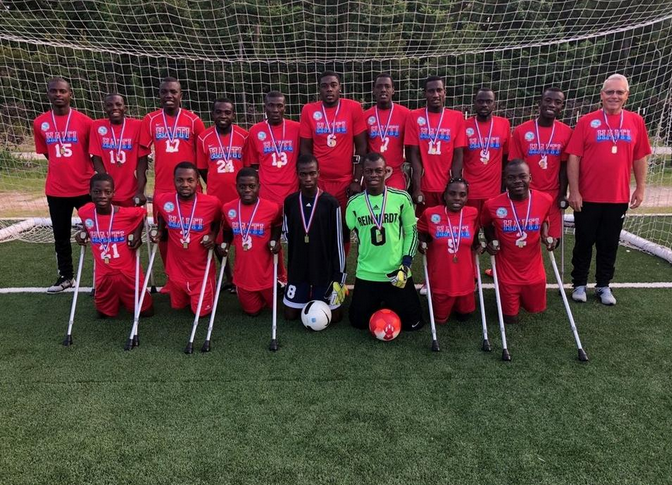 Game on: gearing up for life’s big game.

It’s a sports theme, and VBS week at the church will be introduced by a unique event: the presence of an amputee soccer team from Haiti. Eighteen team members, who range in age from 14 to 34, will be at Southside the first night of VBS — Sunday, June 17 — showing off their not-inconsiderable soccer skills and interacting with the children.

Normal VBS times will be 6 p.m. to 8:30 p.m., but Sunday’s session begins at 5 p.m. The Southside VBS staff encourages parents to get their children registered this week, and to stay and watch the soccer exhibition that begins at 5 p.m.

The team arrived in Florida last month and is on a goodwill tour, making several stops and playing in amputee soccer tournaments. The team is traveling under the umbrella of Fort Worth-based Operation Go Quickly, which has several ministries including amputee soccer. The ministry’s president is Fred Sorrells of Kingsland, who is also the director of operations for the Haiti National Amputee Soccer Team.

Operation Go Quickly “mobilizes children, youth and adults by developing a biblical understanding of, and empathy for, the disabled,” the ministry’s website states. “We equip the body of Christ to actively and quickly reach out to people with disabilities using their gifts, abilities and resources.”

Many of the members of the Haiti soccer team lost one or more limbs in the 2010 earthquake, Sorrells said by phone.

“We’re hugely excited” about coming to Brownwood, Sorrells said. In addition to their engagement at the Southside VBS on Sunday, Sorrells hopes arrangements can be made the Haitian team to play in a community soccer game earlier Sunday, perhaps around 3 p.m., but those arrangements had not been made as of late Friday afternoon.

Southside ministry assistant Laurie Wheelington said Southside became acquainted with Sorrells a few years ago when he accompanied a group from Southside on a missions trip to Haiti.

When the VBS staff decided to have a sports theme this year, the staff contacted Sorrells and asked if he could possibly come to Southside to talk to the VBS children, maybe bring some videos.

“He said ‘well, as a matter of fact, we are going to be in the States at that time,‘” Wheelington recalled. “He asked me the dates of VBS. He said ‘I think we can make it work. I think we can come down and hang out with you.’”

The VBS children will be able to see “just how fantastic they can play soccer with their crutches,” Wheelington said.

She said the VBS staff wants the children “to see that people who have perceived disabilities really are not limited, and by the power of God, everything is possible.

“We just want to get the kids excited about helping others, being servants, getting out, sharing the good news of Christ.”

The Haitian team is also seeking donations of used soccer equipment and large suitcases so the team can take the soccer gear back to Haiti for children there.

Amputee soccer has been described as the greatest one-legged game in the world, the Operation Go Quickly website states. It began as a rehabilitation and strengthening activity in the 1980s and went on to become a global sport with its own World Cup.