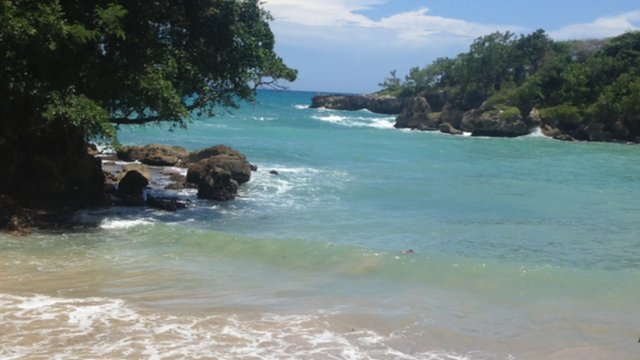 Can Haiti’s sparkling beaches lure back tourists amid political instability and crushing poverty?

Haiti may not be the first Caribbean nation you would associate with tourism. The country’s image is one of political instability and natural disasters. Nevertheless the government there is campaigning to persuade tourists to visit.

The cloudless sky is bright blue, the beaches are made of soft sand and the inviting, warm water is in the unmistakeable azure and turquoise shades of the Caribbean sea.

All that is missing from this tranquil beach in Jacmel on Haiti’s south-eastern coast are the tourists.

A hopeful beach vendor is selling Haitian art, brightly coloured pictures of women working in the fields, and intricate metalwork souvenirs of fish and crabs.

When I was a child, this was the most beautiful country in the Caribbean”

We are her first customers all day.

Haiti’s young, enthusiastic tourism minister, Stephanie Villedrouin is on a mission to bring more visitors to her country.

“Haiti used to have a lot of tourists in the 1970s and early 80s,” she tells me by the side of the pool at the Hotel Montana in Port-au-Prince.

“It was a destination for the jet set. We have all the natural beauty, the art, the food, the music, the people and we are investing in our infrastructure.”

Haiti was branded “the pearl of the Antilles” in the 1950s but the brutal dictatorship of Francois “Papa Doc” Duvalier and his son Jean-Claude “Baby Doc” changed the country’s image.

But now that Haiti is rebuilding after the quake, the government is determined to rebrand the country’s image and generate much needed revenue through tourism. 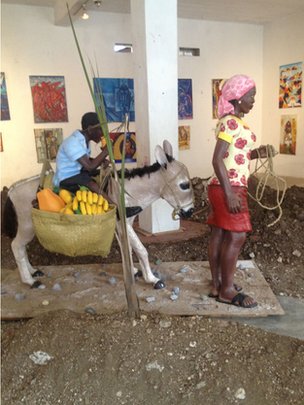 Haiti does make $200m (£130m) a year from tourism, mostly from the cruise ships that come to the north of the island.

Those cruise lines used to tell their visitors they were in Hispaniola, the ancient name for the island shared by Haiti and the Dominican Republic.

But not any more, says Stephanie Villedrouin: “We have a slogan: ‘Experience Haiti’, and we invite people to come here and see our country for themselves. Haiti is not about poverty, disasters, earthquakes, there is another side to the coin,” she stresses.

The Dominican Republic has a thriving tourism industry, and Ms Villedrouin wants Haiti to capitalise on its position at the heart of the Caribbean.

Hotels are springing up around the capital, Port-au-Prince. The airport has had a much needed makeover, and the hotel school which collapsed during the 2010 earthquake has reopened.

The tourism ministry has started to target the Haitian diaspora – Haitians living in Canada and the US who never experienced tourism here as children because they left the country in search of better lives.

The US airline Jet Blue which specialises in tourist destinations is starting a direct flight from New York to Port-au-Prince in December, and the first tourists have started to arrive on package deals from Canada.

Still, getting to the spectacular beaches of Jacmel is not that easy.

We drove from Port-au-Prince across the twisty mountain road, a two-and-a-half-hour journey which would have taken only 15 minutes by plane.

At the end of a bumpy track is the Hotel Cyvadier, one of the few in Jacmel. 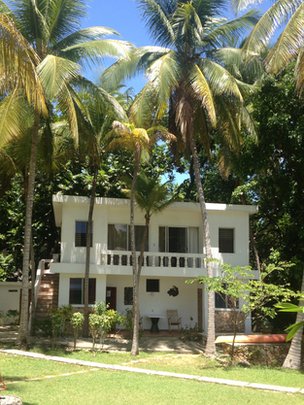 The Cyvadier sits atop a hidden cove, and the palm trees wave in the wind. It is the classic Caribbean hideaway, albeit well hidden.

Owner Christophe Lang hopes the push to promote tourism will bring more visitors drawn by what he sees as Haiti’s authentic charm.

I ask him who he is targeting. “Middle aged, more educated visitors, because it takes a certain level of education to understand what’s going on here,” he says.

“Chances are something may go wrong in Haiti – but it will go wrong with a smile!”

Lately, Mr Lang has seen surfers turn up with their boards, asking for the best spot.

He also has what he calls “mission tourists” staying, people who are visiting orphanages and working with local charities and also seeing the sights.

Voodoo tourism is also a niche market. Mr Lang will accompany visitors interested in learning more about the religion to ceremonies where offerings are made to the spirits.

“In Jacmel it is possible for a foreigner to visit a voodoo ceremony, it is more open, less secretive here,” he explains.

The beaches in Jacmel are being cleaned up by Haiti’s tourism ministry, and earthquake-proof facilities like changing rooms are being built for the visitors.

For 70-year-old Mico Audant, a Haitian-Canadian who has a beach house here, it is time for Haiti to realise its potential.

She believes the country is getting back on its feet after the 2010 earthquake.

“When I was a child, this was the most beautiful country in the Caribbean. Then the situation deteriorated. Now is the time for the tourists to come,” she says.

Haiti may not be everyone’s idea of a dream vacation, but there is little doubt that tourism would bring much needed jobs and investment to a country trying to overcome a troubled past.