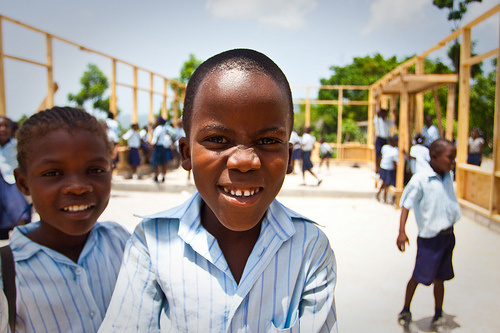 David Mc Fadden:
CANAAN, Haiti — Before the January 2010 earthquake destroyed much of Haiti’s capital, the only occupants of the arid hills near the city’s northern edge were skinny goats foraging amid the cactus and scrub.

Today, hardware stores sell wood and rebar to a flood of homesteaders and children lug water up dusty paths between rows of cinderblock homes and tin-and-tarp shacks. The government estimates that in 5½ years, some 250,000 people have settled in the unregulated sprawl called Canaan, named for the biblical land of promise and prosperity.

Already considered Haiti’s fourth-largest urban district, Canaan, could reach 1 million people in a decade, and alarmed authorities are moving to exert some semblance of control. Regularizing the informal metropolis, however, won’t be easy.

People displaced by the devastating 7.0-magnitude quake have built up Canaan on their own, using an estimated $100 million of their personal money, some of it sent from abroad by relatives, and instilling a streak of independence of which they are proud.

“Outsiders have not provided anything to us,” Fabienne Bosquet said at her family’s scrap-wood shelter as her younger siblings stacked small bags of charcoal for sale. “It is Haitians like us that have made something out of nothing.”

Some of Canaan’s neighborhoods boast food and barber shops, churches, motorcycle taxi stands, and daycare centers. Residents are a mix of desperately poor Haitian families and better-off but still struggling workers, including professionals who commute to Port-au-Prince some 12 miles (20 kilometers) away.

But life here is not easy. Water can be a long walk away, meals are cooked over fire pits and bathrooms are just a hole in the ground.

After years of looking on in dismay at the fast emerging city, the Haitian government is introducing a pilot program to install basic services in a central section of Canaan while a master plan is developed for the entire area.

With $14 million from the American Red Cross and USAID, the program plans to put in paved roads, schools, water and power in one zone while collaborating with residents to ensure their houses meet minimal construction standards.

Both aid groups have been criticized for failing to build housing after the quake, a shortfall directors blamed in large part on muddled land tenure issues, logistical nightmares and struggles cutting through bureaucracy. The experience has resulted in “some pretty tough lessons” for everyone involved, said John Groarke, until recently USAID’s mission director in Haiti.

“It really hasn’t been as efficient and cost-effective as any of us have hoped. And what we’ve learned is that ordinary Haitians, even poor Haitians, have the resources and the resiliency to start building their own houses,” he said from his office in the U.S. Embassy, shortly before leaving for a new posting in Pakistan. “What we want to do is get out of the way and let them do that.”

“On the one hand, it’s amazing that people have managed to survive there and build houses. But on the other hand, it’s clearly not an ideal situation because it really is a new slum now even if you put some money into it,” said Robert Fatton Jr., a Haitian-born professor at the University of Virginia and author of the 2014 book “Haiti: Trapped in the Outer Periphery.”

The biggest fear is that Canaan might become another Cite Soleil, a gang-heavy maze of shacks originally planned as a community for laborers.

In the case of Canaan, the homesteaders putting their own money and sweat into the settlement makes them “very open” to urban planning and upgrades because they want to protect their investments, said Clement Belizaire, executive director of the government’s agency for public buildings and housing.

Authorities accept that resettlement is not an option for most residents, Belizaire said. The government, however, will evict families living in ravines and other very risky areas, especially as more people arrive in search of jobs expected to stem from a nearby seaport slated to open soon.

“We know we can’t stop this heavy influx of people so we have to work with the people to manage Canaan as it is now and formalize areas,” Belizaire said. “This is a very big priority.”

The government initially hoped the area would be a showcase for development, with communities planned around job-generating industries like garment factories. But those ideas fizzled after the quake devastated the Port-au-Prince region Jan. 12, 2010.

Desperate to find shelter for thousands of survivors, the government of then President Rene Preval claimed some 18,000 acres through eminent domain. One site was to be Haiti’s first planned community for the displaced, a group camped on a flood-prone golf course. But the roughly 50-acre (20-hectare) lot of wooden shelters created for them quickly became surrounded by unregulated sprawl.

Compensation for land in Canaan remains a thorny issue. Families who contend they owned the land before the government expropriated it have demanded money. But proving lot ownership is a tall order in Haiti, where the land registry is a shambles.

“One thing is for sure: Nobody who moved there after the earthquake can claim ownership of land, even if they paid somebody for it,” Belizaire said.

In any case, many residents say they will welcome help. Canaan is now their home, not Port-au-Prince, where complaints of punishing rents and greedy landlords were common.

Tony St. Germain runs a small pharmacy by a bustling crossroads where the pilot project will be centered and where a community group has erected utility poles in the hopes they might soon get on the grid.

“We will see if the government is really serious about helping us here,” he said, sweat dripping from his forehead after walking up a hill to his tiny business. “I have a hope this place will improve.”

I can remember that start of this area, immediately after the quake.

Even as the big NGOs and foreign groups stole billions of dollars, these people were working on their own survival. The little shacks and framewaorks, covered with plastic bags, rapidly spread across the hillside.

Absolutely no one helped.

Like the people in the Dominican Republic – some 300,000 of them – they know the govenment will do nothing. If they are to survive, they must manage on their own.