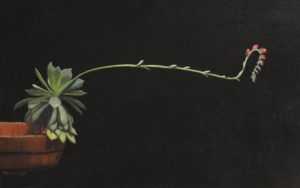 It could be happening soon, reports Afua Hirsch for the Guardian:

And sure enough, in January the African Union is poised to admit Haiti as a member, which if it happens, will be the first time any nation with no geographic connection to the continent of Africa will have joined.

More than any other Caribbean nation, Haiti occupies a special place in the affection of many Africans and members of the African diaspora. The country endured decades of still prescient punishment for daring to overthrow its slave masters, becoming the world’s first independent black nation in 1804 – the slave rebellion’s leader Toussaint L’Ouverture hailed from Benin. Haiti used its independence and membership of the United Nations in the post-war period to back decolonisation during the fraught period of African independence.

And now it has a level of poverty gives it more in common with many African nations than its wealthier Caribbean neighbours, who have been known to regard Haitan refugees as a nuisance. After the 2010 earthquake, the Democratic Republic of Congo – which struggles to finance its own budget – pledged $2.5m in aid to the devastated country. Senegal offered land and places at its university to Haitan students. As the African Union chairman, Jean Ping, said: “We have attachment and links to that country. The first black republic … that carried high the flame of liberation and freedom for black people and has paid a heavy price for so doing.”

Some of the more practical factors include the potential for Haiti to participate in intra-African trade and receive investment from some of the continent’s relatively booming economies.

It would be a geographical oddity, to be sure, though it makes more sense than Panama adopting the euro.

The Martelly government has irritated the Canadians and Americans so much that he must now focus on the Africans.

At one point I called Haiti the Nigeria of the Caribbean.

Now Nigeria is the Haiti of Africa, having been passed by the Martelly team’s blatant corruption. There is a rumor that Queen Sophia will become and Ambassador at Large to the African nations, traveling around to explain how it is done.