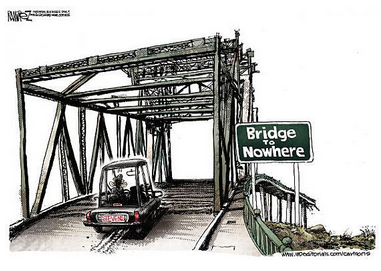 In August 2015, President Michel Martelly inaugurated the Delmas viaduct, a four-lane overpass designed to ease the capital’s grid-locked streets. “This viaduct proves once again that together we can achieve great and beautiful things,” Martelly told the large crowd that had assembled. “More than a dream, more than a project, this viaduct is now one of the symbols of Port-au-Prince.” 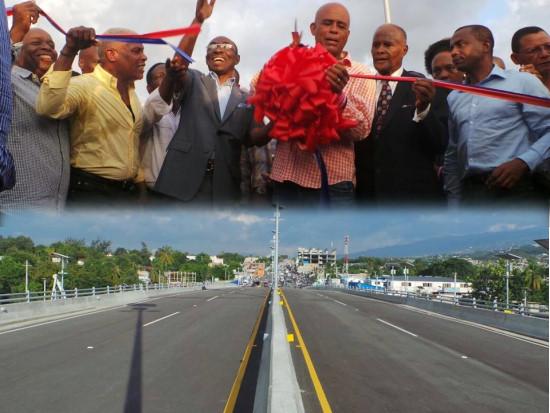 Underneath the overpass, bands provided live entertainment throughout the hours-long inauguration ceremony which eventually turned into a political rally. Martelly’s term as president was coming to an end, and presidential elections were set to take place in a few months.

“This is the man I have picked to succeed me for my party,” Martelly said from the stage, calling up the man next to him for all to see. “His name is Jovenel Moïse.” 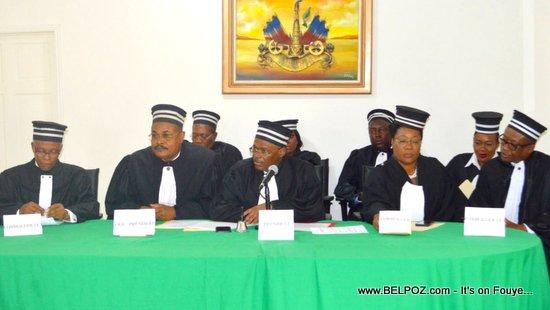 Nearly four years later, on May 31, 2019, Haiti’s Superior Court of Auditors (CSCCA) released a 600-page investigation into more than $2.3 billion in Petrocaribe-related expenditures between 2008 and 2016, when Moïse eventually secured the presidency. The report identified nearly $2 million in questionable payments made to Moïse in late 2014 and early 2015. The largest came just days after he registered as the governing party’s presidential candidate.

As for the viaduct, Martelly was right. It has become a symbol of Port-au-Prince. A concrete symbol of government waste. And a rallying point for Haiti’s growing anticorruption movement.

On October 17, 2018 and again on November 18, 2018 massive anticorruption protests took place in Port-au-Prince and in provincial towns across the country. “Where is the Petrocaribe money?” They demanded. In the capital, before marching up Route Delmas — which runs from the poorer neighborhoods downtown straight up the hill to the comparatively wealthy Petionville — the various organizations and neighborhoods participating amassed at the overpass.

Now, approaching a year since the launch of their movement, organizers are planning another march for June 9. Armed with the CSCCA report, the question is no longer where did the money go, but what is the government going to do about it. There won’t be any confusion about where the demonstration will begin.

But the story of the viaduct itself reveals just how difficult it will be to ensure justice and accountability in Haiti – and abroad. It’s not just the Haitian government that may be reticent about following the money. The implications of the Petrocaribe scandal in Haiti are vast and extend far beyond the country’s own borders and its own political class. 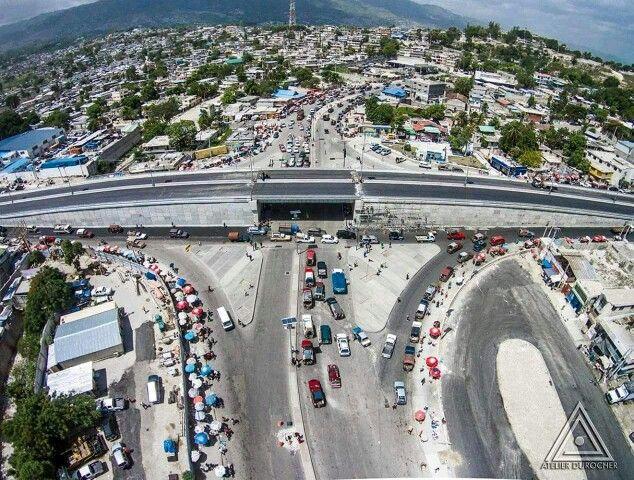 Plans for the Delmas viaduct have been around for decades, the brainchild of the politically connected local representative of the Canadian conglomerate SNC-Lavalin, Bernard Chancy. In 2005, SNC-Haiti completed a study on the viability of the project, but couldn’t find the funding to make it a reality. 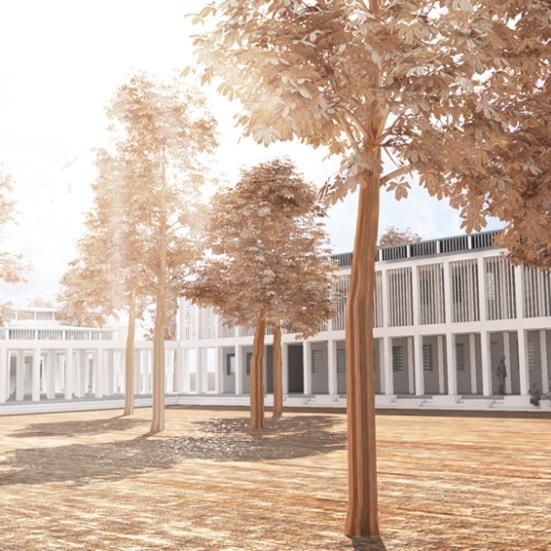 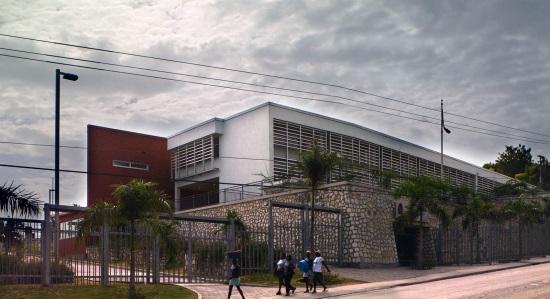 In the meantime, SNC-Lavalin and its local subsidiary were becoming increasing involved in Haiti. The firm handled the design and construction of the new Canadian Embassy, inaugurated in 2004. It undertook the engineering studies and then supervised the construction of a number of other structures, including the Faculty of Agronomy and Veterinary Medicine. The firm found itself on the UN’s approved vendor list, and on the receiving end of millions in Canadian foreign assistance funds.

In Canada, the firm became one of the Liberal Party’s most steadfast donors. But it had political connections in Haiti as well. A family relation of its Haiti representative, Michael Chancy, was a deputy agricultural minister in Rene Préval’s 2006-2011 government and then was one of the only senior administration officials to be retained in the new administration of Michel Martelly. 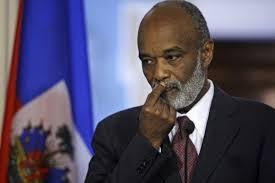 But according to a senior Haitian government advisor during the Préval years, SNC-Haiti, despite its political connections, was unable to convince Préval during either of his two terms in office to approve the viaduct project, which the president dismissed as “a rip-off.”

That didn’t stop SNC-Haiti from once again attempting to sell its pet project to the incoming Martelly administration though. And the earthquake presented an opportunity for Bernard Chancy and the Delmas viaduct.

Donors pledged billions of dollars toward Haiti’s reconstruction, and the “gold rush” was on. The vast majority of donor funds went to international organizations or private firms in the donor’s home country. The government of Haiti, meanwhile, became increasingly reliant on the Venezuela-led Petrocaribe initiative. From 2011 to 2015, the oil-for-loans program provided the government with more than $250 million per year.  The new administration was eager to show it was doing something, however expensive or nonsensical the project.

But as the viaduct project reveals, much of the government’s Petrocaribe funding also went to international companies – though often via a local subsidiary. 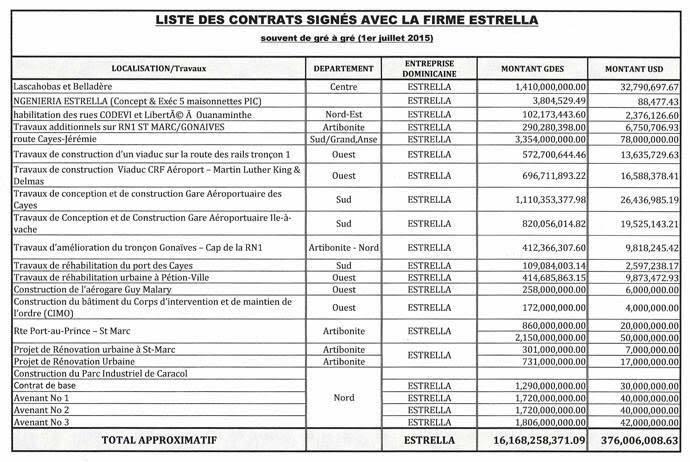 In the fall of 2012, SNC-Haiti, operating under the name LGL S.A., updated its earlier viaduct analysis. On December 27, 2012, the Haitian government signed a $16.6 million contract with a different company, Estrella, to build the Delmas viaduct. Estrella, one of the largest construction companies in the Dominican Republic, also received a $13.6 million contract to build another viaduct on Route Carrefour, the main road leading from the capital to the south of the country.

The Haitian government provided Estrella with an advance on both projects and awarded a $2.7 million contract to supervise the work to LGL S.A., the SNC-Lavalin local affiliate led by Bernard Chancy.

According to the contracts, which the CSCCA analyzed as part of its report, Estrella was to finish both projects by February 2015. Oddly, LGL S.A.’s supervisory contract ended in November 2014.

At the end of the 18-month deadline, the projects were nowhere near finished. The Delmas viaduct appeared closer, but the Carrefour viaduct had barely been started. And the costs had increased. The CSCCA found that, for the Delmas viaduct, the cost of earthwork had increased by 213 percent and “drainage and sanitation” by 141 percent.

LGL’s supervision contract came to an end in late 2014, but in February 2015, the government gave an additional $5 million to Estrella to continue work on the Delmas viaduct. Though Martelly inaugurated the overpass in August 2015, Estrella received more than $600,000 in 2016 for costs related to the project. 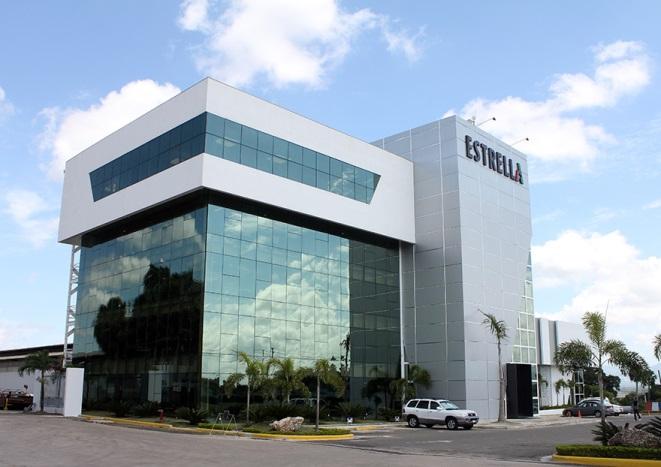 Today, the Delmas viaduct is at least operational, but the Carrefour overpass has yet to be completed. LGL received $2.1 million of its supervision contract. Estrella received nearly $30 million – and that could still increase. Millions more were allocated to the project and have yet to be disbursed.

The CSCCA auditors wrote that the government agency responsible for both projects, the Ministry of Public Works, “did not implement the project in accordance with the principles of efficiency, effectiveness, or economy” and that its actions did not comply with “sound management practices.”

It came as little surprise to the thousands of Haitians who have gathered underneath the overpass before each recent anticorruption demonstration.

In the aftermath of the CSCCA report, most of the focus has been on President Jovenel Moïse. It was the president who, responding to the increasing pressure from the anticorruption protests, tasked the CSCCA with investigating the fund in late 2018. No government officials or private sector actors have yet to appear in court over Petrocaribe-related corruption. “We will await the CSCCA report,” the president said repeatedly in one form or another.

Popularized during his election as “The Banana Man” due to his ownership of a banana plantation, Agritrans, it turns out the firm may have had more success as a government road-building contractor. And now that the court has implicated Agritrans in the Petrocaribe affair, calls for the president’s resignation have come from disparate corners of the political landscape.

But it’s not just the Haitian government who is afraid of where a judicial investigation may lead.

“For sure, the [governing party] received money from Petrocaribe,” a foreign diplomat stationed in Haiti told me late last year. “The government doesn’t want an investigation.” But, the source added, “the international ramifications of Petrocaribe are far greater than we know.” It’s not just Haiti that may not be interested in following the money.

Estrella received more than $100 million in Petrocaribe funds, and wasn’t even the largest Dominican recipient. And then there are the businesses in the United States and Canada, often operating through local branches and linked to members of the diaspora.

Many are quick to point out the pervasive level of corruption in Haiti, but few want to look at the international reach of that corruption. Or, viewed differently, the corrupting influence of international actors within Haiti. 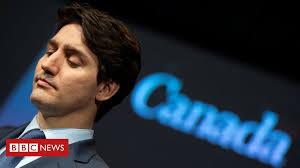 SNC-Lavalin is currently embroiled in a corruption scandal that reaches all the way to the Prime Minister of Canada, Justin Trudeau. It was revealed in 2018 that the company had been illegally funding politicians for years. Then, as a SNC-Lavalin came under legal scrutiny again over bribes paid to the son of former Libyan leader Muammar Qaddafi, the firm attempted to cash in on those long-standing political connections. The Attorney General of Canada resisted the political pressure, but was promptly pushed out of her position. A taped phone call revealed she had previously been threatened with losing her job if she pursued the case against SNC-Lavalin. 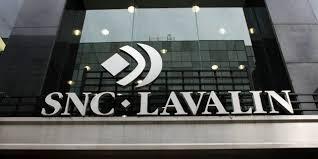 Then there is Estrella. Like SNC-Lavalin, Estrella has received contracts not just from the government of Haiti, but multilateral and bilateral donors in Haiti as well. And in the Dominican Republic, Estrella also finds itself embroiled in corruption allegations. The firm was part of a consortium with Odebrecht, the Brazilian multinational, to construct the Punta Catalina coal-fired power plant. Prosecutors have alleged Odebrecht paid some $92 million in bribes to secure the contract and have issued a number of indictments in the Dominican Republic. 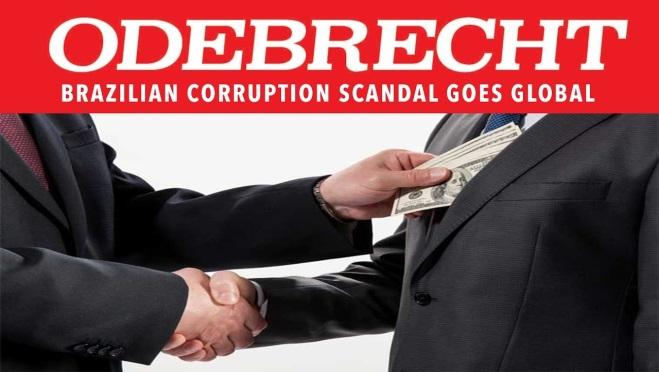 On June 9, many Haitians will once again meet underneath the Delmas overpass before proceeding up the hill to Petionville. And Haitian president Jovenel Moïse will be serenaded with calls for his resignation. It is his involvement that has received media attention and popular scorn.

But this is a scandal that extends far beyond the current president, and far beyond Haiti altogether, as the case of the Delmas viaduct makes clear. Still, the president faces a problem. As I told Jacqueline Charles of the Miami Herald, “President Moïse has pledged action, and action will be necessary to calm political tensions— but it will be very difficult to judicially pursue members of the private sector or former government officials when it is the president himself who now stands accused.” 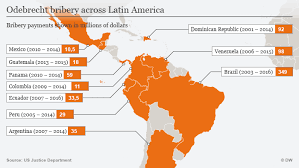 Whatever the fallout from the CSCCA report and the Petrocaribe scandal, it’s worth remembering that Haitians do not have a monopoly on corruption – not even in their own country. Perhaps that can be added to the list of what the Delmas viaduct has come to symbolize.

This article first appeared on CEPR. 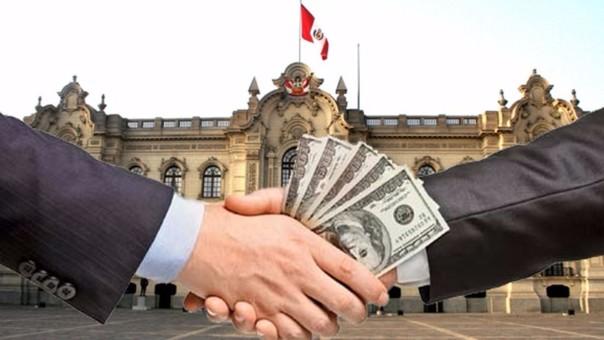