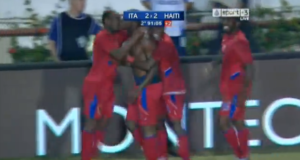 Haiti shocked Italy by coming up with equalizer in the second minute of injury time to earn a 2-2 draw in Rio. It was Italy’s final warm-up match before they take part in the Confederations Cup and though they started with a very experimental line-up, manager Cesare Prandelli still called the result “an embarrassment.”

For Haiti, it’s a feel-good moment for a country that hasn’t had many in recent years. Playing all six of their matches away from home this year, three years on from the earthquake that ravaged Haiti’s capital, they had yet to get a result. Losing 2-1 to world champions Spain in Miami on Sunday provided Haiti with a confidence boost and their determination didn’t waver, even after Italy scored within 20 seconds of kick-off and went up 2-0 in the 73rd minute. Haiti pulled one back with a penalty in the 85th minute and then a long ball from their own half to Jean Phillipe Peguero, who sped past Italy backline, led to the equalizer.

Haiti rejoiced, and Prandelli could only lament the result. From Football Italia:

“It is certainly a bad result and an embarrassing one, as a draw with Haiti is an embarrassment,” the Coach told Rai Sport.

“We arrived yesterday and made many changes. We should’ve been different in terms of spirit today.”

Both this friendly and the one against Spain raised money that will go towards building a new stadium in Port-au-Prince and the general redevelopment of Haiti, so this means far more than just a morale boost. Speaking of which, here’s Haiti’s Jeff Louis showing up two Italian defenders with a bit of local flair earlier in the match…