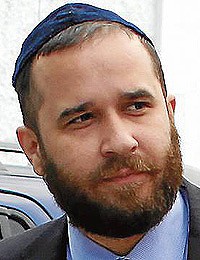 BURLINGTON, Vt. — Extradited from the Dominican Republic, wanted in Pennsylvania and indicted in Vermont for allegedly smuggling illegal immigrants, a former adviser to U.S. missionaries who were accused of taking children out of Haiti was ordered held without bail Friday.

Jorge Torres, 32, pleaded not guilty in his first court appearance since being returned to face charges that he smuggled immigrants from Canada into the U.S. in 2002. If convicted, he could get 25 years.

Torres, whose aliases include Jorge Puello, Jorge Torres-Puello and George Simard, made news this year after the Haiti earthquake, acting as a lawyer and spokesman for 10 Baptists from Idaho who were detained in Haiti on child kidnapping charges and later released.

But he became the target of an international manhunt after being identified as a man wanted in the U.S. and in El Salvador, where he allegedly led a prostitution ring.

Torres, who was born in Yonkers, N.Y., and has dual U.S.-Dominican Republican citizenship, wasn’t charged in connection with his dealings with the missionaries.

The Vermont case dates to 2002, when he allegedly organized illegal border crossings in which illegal immigrants from Costa Rica and other Central and South American nations were driven across the U.S.-Canada border at unguarded rural locations.

He’s been a fugitive for most of the past 10 years, according to Assistant U.S. Attorney William Darrow, who told U.S. District Judge William K. Sessions III that Torres disappeared after being put on supervised release following a federal bank fraud conviction in Pennsylvania.

He moved to Canada and took the name George Simard before indicted in Vermont in 2003.

Hoping to try him, the U.S. started proceedings to extradite him from Canada, but he fled again and his whereabouts were unknown until he surfaced in Haiti, according to Darrow, who called him a flight risk if he were to be freed on bail.

Wearing blue jeans, a golf shirt and a yarmulke, Torres objected when the judge said he would give Torres’ court-appointed attorney 90 days to obtain the government’s evidence against him.

“The government has had eight years to give discovery,” he said. “I prepared for eight years. I’m ready to go (to trial) tomorrow,” Torres said.

His attorney, David Watts, declined comment on the case against Torres after the hearing.