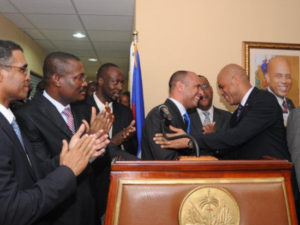 Laurent Lamothe, Haiti’s foreign minister who has links to South Florida, has been nominated to be Haiti’s prime minister.

A self-made entrepreneur and former tennis star player was tapped Thursday to become the next prime minister of Haiti.

Lamothe, 39, is one of Martelly’s closest advisors. The two have been longtime friends and were partners in Global Voice Group, a South Africa-based telecom company, which among other things offer prepaid calling cards, before Martelly’s candidacy for president.

Lamothe represented Haiti on the country’s Davis Cup team in the mid-1990s.

Desras and Levaillant Louis-Jeune, president of the lower chamber of deputies, were notified of the choice in a meeting with Martelly Thursday morning. The president later made it official in a letter.

Lamothe’s journey to the No. 2 post in Haiti will not be easy, and likely will require considerable deal making by Martelly, who has until now been unwilling to compromise with the opposition-controlled parliament. Senators Thursday immediately began discussing whether Lamothe meets the basic constitutional requirements to replace caretaker Prime Minister Garry Camille, who resigned last Friday after four months.

Among the issues being raised among senators: Lamothe’s residency, nationality and the need for him to present a “discharge,” a document clearing him of any mismanagement of state funds in the four months he has been foreign minister.

Haiti’s constitution not only forbids the prime minister from holding a foreign passport, but the individual is required to have lived in the country for the past five years. Before his foray into Haitian politics, the U.-S. educated Lamothe was a businessman living in Miami and parts of Africa where his company did extensive business. Lamothe was born in Port-au-Prince, but like others in the Martelly administration, has been the subject of dual nationality accusations by some lawmakers. He has denied renouncing his Haitian citizenship.

After Martelly’s, Lamothe’s has been the most visible face of the Haitian government. He has used his position as foreign minister to promote foreign investment, and he serves as co-chairman of the Presidential Advisory Council for the Economic Development and Investment in Haiti along with former President Bill Clinton.

“I am not sure why Lamothe wants to be prime minister. He is in a position of power. He was even more powerful than Conille,” said Michel Eric Gaillard, a Port-au-Prince political analyst, referring to Lamothe’s closeness to Martelly and reputation as the “go-to” guy even among some foreign diplomats seeking to influence Martelly. “For Lamothe to win the nomination, President Martelly will need to improve on his negotiating skills with the parliament.’’

Jocelyn McCalla, a longtime Haiti expert who lives in New York City, said that while Lamothe appears to be “an energetic, goal-oriented go-getter who appears to have made few mistakes” while serving as foreign minister, his nomination comes at a time when it appears that Martelly “has provoked enough frustrations and anxieties throughout Haitian society to trigger an ever-growing opposition, which is now being joined by some who had jumped on his bandwagon last year.”

“I foresee a protracted nomination process. Lamothe might not make it through since he may not meet the residency requirements,” McCalla said. “If he does, his stature is likely to be much more diminished, and I suspect that presidential antics will continue governing Haiti.”

Lamothe’s designation comes less than a week after Conille’s surprised resignation. A physician and former U.N. diplomat, Conille stepped down after four months amid tensions with Martelly and members of his cabinet. Conille is the 10th prime minister to be deposed or dismissed, or who has resigned, since Haiti ushered in democracy in 1986.

On Tuesday, more than a dozen Haitian civic groups called on fellow leaders to vigilantly “preserve the gains of 1986 and the chances for the Haitian people to really get out of misery and underdevelopment.”

“Today, we are witnessing a challenge to the democratic rules that leads us into a crisis with unpredictable consequences,” the statement signed by 13 civil society groups said.

The statement went on to list a number of concerns including Martelly’s failure to publish constitutional amendments passed by the National Assembly in May and the push by some of his supporters to repeal the current 1987 Constitution and dismiss parliament in favor of a Constitutional Assembly: “Such an approach is totally unacceptable, unconstitutional and dangerous for the future of democracy and stability in our country.”

The statement also calls for the organization of senatorial and local elections, and a respect for press freedoms.

It criticizes what they say is a “waste of scarce state resources into unproductive and extravagant expenditures, including contracts devoid of clauses that protect the interests of the nation,” and the Martelly administration’s lax attitude toward hundreds of armed, ex-military officers who have taken over former military barracks.

“The country certainly needs an army,” the statement said, “but it must be from a true national consensus and with the legal guarantees that it will serve neither a political faction, nor of any illicit economy.”

Earlier this week, U.S. Secretary of State Hillary Clinton’s Chief of Staff, Cheryl Mills, speaking at George Washington University, reiterated the international community’s call for Haitian politicians to put their country’s interest above their own. .

“In Haiti, it unfortunately only takes a few who lack the commitment to put Haiti first, and put their needs first, to derail the progress of the whole nation,” Mills said.

In a statement after Conille’s resignation, Clinton, who co-chaired the country’s Interim Haiti Recovery Commission, said he had “tremendous respect for Prime Minister Conille and his decision to step down.” Conille had served as a top Clinton aide in his role as U.N. Special Envoy for Haiti and co-chairman of the recovery commission.

Clinton urged Martelly, his government and Parliament to quickly confirm a new prime minister, hold parliamentary and local elections, “and to return to putting the people and future of Haiti ahead of political and personal gain.”