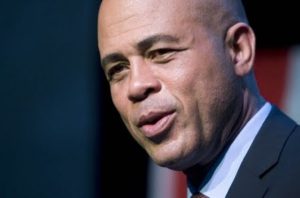 The presidential palace, parliament and Cathedral are all broken. But the celebration must go on as Haiti improvises for Saturday’s presidential inauguration.

PORT-AU-PRINCE — On the neatly manicured lawn of the National Palace, Haiti’s collapsing symbol of presidential power, workers are busy building wooden bleachers and draping them in red and blue in time for Saturday’s inauguration of former musician Michel Martelly.

Activity abounds, as well, outside the damaged National Assembly building a few miles away.

The palace, parliament and National Cathedral are all wrecked, destroyed by last year’s massive 7.0 earthquake, which claimed more than 300,000 lives.

“Everything is broken,’’ said Daniel Supplice, head of Martelly’s presidential transition team. “But we don’t have a choice. The president has to be inaugurated either way. It has to be done. We have to see how it is done.’’

The inauguration ceremony begins early Saturday with the arrival of Martelly, parliamentarians and President René Préval at a plaza near the parliament building. It will end with festivities throughout all 10 of Haiti’s geographical political departments, said Fritz Jean-Louis, Martelly’s chief celebration planner.

The ceremony will be the high point of events to mark the rise to the presidency of the konpa star better known as “Sweet Micky’’ after an election fraught with controversy, protests and foreign diplomatic intervention.

A group of Haitian-Americans held a $500-per-person VIP reception and dinner fundraising benefit Thursday night at the upscale Karibe Hotel in Petionville. On Saturday, there is a $500-a-plate “selection admission only’’ inaugural ball by the Florida Martelly Group at the Ritz Kinam in Petionville. It will feature a five-course dinner by former Bravo Top Chef contestant Ron Duprat.

At 9 a.m. Friday, all of the nation’s Catholic Churches are scheduled to hold a Mass in honor of Martelly. In the afternoon, there will be Protestant services followed by a prayer revival and concert on the Champ de Mars, the downtown public square-turned homeless encampments for tens of thousands of quake victims.

Three sets of invitations have gone out — some are still going out (French President Nicolas Sarkozy received his Tuesday) — for three distinct events. Total cost: $4.5 million, according to government officials.

The swearing-in outside parliament’s new building will immediately be followed by a ceremony on the grounds of the National Palace, which has been transformed into a showcase with tents as the backdrop. About 2,500 people are expected. A reception that would have taken place inside the palatial white structure was moved to the Karibe.

Even the Roman Catholic Mass, which would have taken place in the Cathedral, has been moved to the palace grounds.

“We will not have a long cultural program,’’ Jean-Louis said.

Not part of the program is the former self-appointed president of konpa’s famous carnival pledge to dance naked on top of the National Palace once he becomes president.

“Maybe once the country is back on track and the people have found some relief, he may sing a song,’’ Jean-Louis said, laughing.

About 150 foreign dignitaries have confirmed for the inauguration, and they begin arriving on Friday. The list includes just three sitting presidents, representing Honduras, the Dominican Republic and Suriname. The tiny South American nation has the largest delegation with 17.

The White House announced this week that the U.S. delegation will be led by former President Bill Clinton, co-chair of the Interim Haiti Reconstruction Commission; and include Kenneth Merten, U.S. ambassador to Haiti, and Thomas Adams, Haiti special coordinator in the State Department.

France will be represented by Foreign Minister Alain Juppé, Haiti’s French Ambassador, Didier Le Bret, said. His entourage of 10 will include a member of parliament and two ambassadors, including Le Bret.

The English-speaking Caribbean community will be represented by Prime Ministers Hubert Ingraham of the Bahamas, Tillman Thomas of Grenada and Bruce Golding of Jamaica.

No celebration in Haiti is without a bit of controversy, and Martelly, 50, isn’t spared. His invitation to all of Haiti’s eight living presidents, including former President-for-Life Jean-Claude “Baby Doc’’ Duvalier, has stirred emotions.

Calling the invitation “scandalous,’’ Haiti’s National Human Rights Defense Network has reminded Martelly that Duvalier is currently charged with numerous crimes committed during his 15-year reign and is under house arrest. He has refused to “answer the summons of the magistrate on the grounds that his health is precarious,’’ the group said. Duvalier has refuted that he’s under house arrest.

The invitation, it said, “is a total disregard to the tens of thousands of victims’’ and raises the question on whether Martelly “will start his five-year term under the sign of forgetfulness and impunity.’’ It added that the image of Duvalier sitting with the other former presidents is “disturbing.’’

But Jean-Louis said Martelly is striving for an image of “reconciliation’’ in a country with a turbulent history.

“The image will be pretty for the country if they are all there,’’ he said. “There is a time that arrives for us to say — ‘Here is how we are going to advance.’ ’’

But it’s unlikely that Martelly will get all of Haiti’s presidents sitting along the same row. Former President Leslie Manigat, whose wife lost to Martelly in the March runoff, is on a cruise. Henri Namphy is in the Dominican Republic, and unlike Duvalier, Jean-Bertrand Aristide, who also recently returned from exile, has been keeping a low profile. Also uncertain is whether Préval will stick around after passing the presidential sash, the symbol of power.

Let’s get off the anti-Duvalier kick or at least talk to the majority of people who are happy to have Duvalier back.

Duvalier is not under house arrest.

There is no such thing in Haitian law.

I saw Duvalier at a wedding two days ago, so what type of crap is Charles purveying??

It would also be useful to take a look at the Aristide/Preval list of crimes that include such misdemeanor offenses as murder, kidnap, rape, torture, cocaine trafficking, and theft of public funds on a scale that makes any accusations against Duvalier $6,200,000 look like chickenfeed.

Preval has stolen – in one gulp – $198,000,000 from Petro Caribe funds dedicated to assist hurricane victims.

Duvalier will be able to walk the streets of Haiti next week as a popular, welcome citizen of Haiti, greeted by all he meets…without security.

Preval will not dare to appear in public, when he leaves office. Reviled Dictator is a phrase that applies to Rene Preval, a guy who stole the 2006 election with the help of MINUSTAH. His 23% of the vote was expanded to 51% in order to avoid a run-off and give MINUSTAH a willing puppet.

Aristide knows his popularity and remains in seclusion with a 61 man security team.

Somehow Charles and the Miami Herald seem to be missing the message….but, that is the very nature of the Miami Herald and Ira Kurzban…two elements that created the ARISTIDE MYTH, a myth now in tatters.