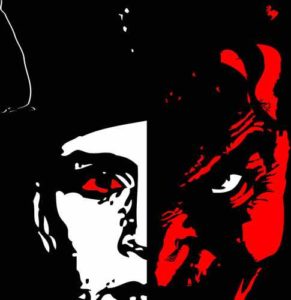 A Harley biker is riding by the zoo in Washington , DC when he sees a little girl leaning into the lion’s cage.

Suddenly, the lion grabs her by the cuff of her jacket and tries to pull her inside to tear her apart in front of  her screaming parents.

The biker jumps off his Harley, runs to the cage and hits the lion  square on the nose with a powerful punch.

Whimpering from the pain the lion jumps back letting go of the girl,  and the biker brings her to her terrified parents, who thank him endlessly.

Jacqueline Charles, of the Miami Herald –  watched the whole event. The reporter addressing the Harley rider says, ‘Sir, this was the most gallant and brave thing I’ve seen a man do in my whole life.’

The Harley rider replies, ‘Why, it was nothing, really, the lion was behind bars. I just saw this little kid in danger and acted as I felt right.’

Charles  says, ‘Well, I’ll make sure this won’t go unnoticed. I’m a journalist, and tomorrow’s paper will have this story on the front page… So, what do you do for a living and what political affiliation do you have?’

The following morning the biker buys the paper to see news of his actions, and reads, on the front page :
U.S. MARINE ASSAULTS AFRICAN IMMIGRANT AND STEALS HIS LUNCH

That pretty much sums up the media’s approach to the news these days!!!

In Haiti, the media still tried to present Aristide as a tremendously popular, charismatic people, with wild crowds cheering him wherever he goes.  In fact, Aristide does not go anywhere, frightened of the potential reaction of the people. He hides behind a security element of over 60 armed guards.

His arrival at the airport, where he was greeted by 100 journalists, a similar number of airport employees and a couple of dozen supporters…was an indicator of his true popularity. An even more important element, missed by those who do not know the players, was the total absence of key Lavalas leaders at the airport. They did not want to gamble their reputation by being involved with a failed media event.

On the other hand, the media continually refers to Duvalier as – the reviled dictator, suggesting he is hated by Haitians when he is cheered and mobbed wherever he goes… with one policeman as security – the people eager to shake his hand and greet him. Haitians always loved Duvalier – it was the International Community that forced him out.

There should be a message here but the mainstream media has yet to tune in.

4 thoughts on “A REALITY CHECK ON MEDIA REPORTING IN HAITI WHAT YOU SEE IS NOT WHAT YOU GET. THIS STORY INDICATES THE PHILOSOPHY”