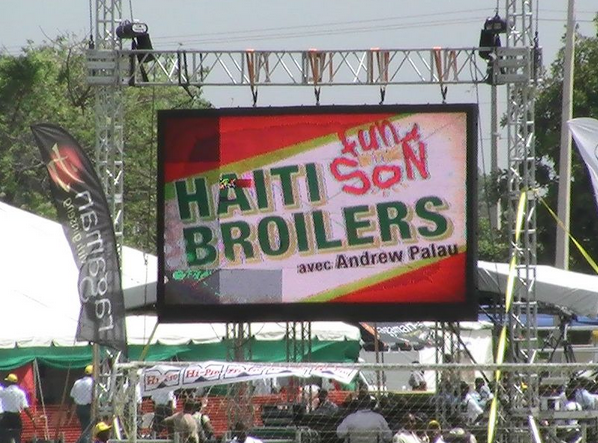 LAFITEAU, Haiti — Henry Chatelain remembers the disappointment he felt in 1998, when his employer, a Haitian chicken production company, shut down and its 500 workers lost their jobs.

The company, Prinsa, had recently expanded its capacity, but with cheaper chicken imports pouring in from the U.S. and other countries, it could no longer stay in business.

“They could not compete,” Chatelain said.

Prinsa was among the three leading chicken producers, all of which closed in the late 1990s. On the heels of a stifling trade embargo, Haiti dramatically lowered its tariffs to other countries — from as high as 50 percent to lower than 3 percent, with the rice sector hit particularly hard. With the lowest tariffs in the Caribbean, Haiti’s agricultural sector has yet to recover.

Trade liberalization had been encouraged by the International Monetary Fund and the United States. Haiti struck an agreement with the IMF and World Bank in 1995, committing to tariffs below 15 percent as part of an economic aid program.

Haiti imports nearly 70,900 metric tons in poultry meat in a year, which is mostly chicken meat. The amount dwarfs the annual production of about 9,600 metric tons of chicken, according to country officials. Most of the imported chicken comes from the U.S., where consumers buy the more expensive white meat. The dark meat — sold in frozen parts — is shipped to Haiti and is two to three times cheaper than the birds sold in the market or in stores. With nearly 60 percent of the country living in poverty, the market for more expensive fresh chicken is limited.

Former President Bill Clinton has described the Haitian trade liberalization he pushed for as a mistake, calling it a “devil’s bargain” that especially benefited Arkansas rice farmers at the expense of Haiti’s economy. Haiti was nearly self-sufficient in rice before reduced tariffs, but now imports comprise 80 percent of its consumption.

“Haiti has a much more liberalized market, much lower tariffs, across the board,” said Marc Cohen, a senior researcher at Oxfam America, a global nonprofit focused on international development. “In the ‘90s, that was a very popular view in development circles, that if you open your markets that will help you develop.”

That has not been the case for Haiti. The country’s trade deficit has steadily ballooned over the past two decades with agricultural exports nearly disappearing and imports surging.

The issue extends beyond chicken and rice. In March the U.S. Department of Agriculture announced it was donating 500 metric tons of packaged peanuts to Haitian children as part of a “humanitarian effort.” The donation was criticized among aid groups who saw it as another initiative that undercut Haitian farmers.

Buy PhotoYoung chickens line up for a meal in Gressier. The young brood will be nurtured for 42 days and then sent to market. (Photo: Larry McCormack / The Tennessean and Pulitzer Center on Crisis Reporting)

Jamaica Broilers, a chicken production company that employs close to 2,000 people in Jamaica, opened Haiti Broilers in 2011, seeing the potential for expansion. It buys chickens from smallholder farmers that it processes for groceries, restaurants and hotels. The company operates partly in the former Prinsa site and employs more than 200 Haitians in its egg, hatchery, feed and processing facilities.

KORE Foundation is one of its leading suppliers. The nonprofit, founded by a former pastor who lives in Gallatin, provides loans, training and oversight to 185 rural farmers, who raise about 400 chicks at a time. Through chicken farming, they go from dollar-a-day poverty to being able to generate a sustainable income.

“The disposable income is low,” Fairman said. “Cheap is going to always win.”

U.S. chicken producers argue the low tariff allows those without reliable income sources to afford the critical protein in their diet. Higher tariffs would eliminate their buying power.

“There also needs to be a more affordable product for the low income and the nutritionally deprived consumers,” said Jim Sumner, president of USA Poultry & Egg Export Council. “If you look at the number of people in Haiti that are involved in poultry production versus those in the poverty level, it’s easy to see which the larger group is.”

Those in Haiti’s agricultural sector charge the U.S. producers with “dumping” chicken in Haiti, an allegation Sumner says is false. Sumner is also critical of the higher tariffs imposed by other Caribbean countries, which he said are examples of protectionism and unfair to the struggling consumers.

“Which is more important: feeding the poor, undernourished citizens of Haiti or increasing the wealth of a couple of companies that have primary control of their poultry?”

“It’s a matter of priorities,” Sumner said. “Which is more important: feeding the poor, undernourished citizens of Haiti or increasing the wealth of a couple of companies that have primary control of their poultry?”

Fairman acknowledges the benefit of inexpensive chicken for consumers but said the loss of agricultural production has greater economic consequences. It’s an argument underway in the U.S. as well, as manufacturing workers are calling for increased import tariffs to preserve U.S. jobs.

When Dr. Michel Chancy, Haiti’s secretary of state for animal production, explains the impact of cheap imports, he points to the egg market. When the government banned eggs from the Dominican Republic during an Avian flu outbreak, local egg production increased by 600 percent in four years. Eggs are still brought in illegally, but Haiti saw significant results with greater restrictions.

With the majority of Haitians living in rural areas, the agricultural sector must strengthen, and increasing the tariffs is the first step in doing so, he said.

Chickens are raised in a farmer’s coop in Gressier. Middle Tennessee nonprofit KORE Foundation is combating poverty in rural Haiti with the help of chickens.   Larry McCormack / The Tennessean and Pulitzer Center on Crisis Reporting

Cohen says any tariff increase must be gradual and in conjunction with agriculture investments that allow local production to increase and better meet consumers’ needs.

“It’s not just a question of trade policy,” he said. “There needs to be investment in local production.”

This reporting was supported by a grant from the Pulitzer Center on Crisis Reporting.

Haiti, with a population of 10.6 million, is one of the top importers of U.S. chicken

Source: Economic Research Service of the U.S. Dept. of Agriculture

There is still an almost 80% gap between consumption and production.
HAITI BROILERS has initiated a project that sees them producing about 15% of the previous importation of chicken from the Dominican Republic.

There is a lot of room for Haitians to enter the market. Until then, Haitians must be fed and imported chicken is important.