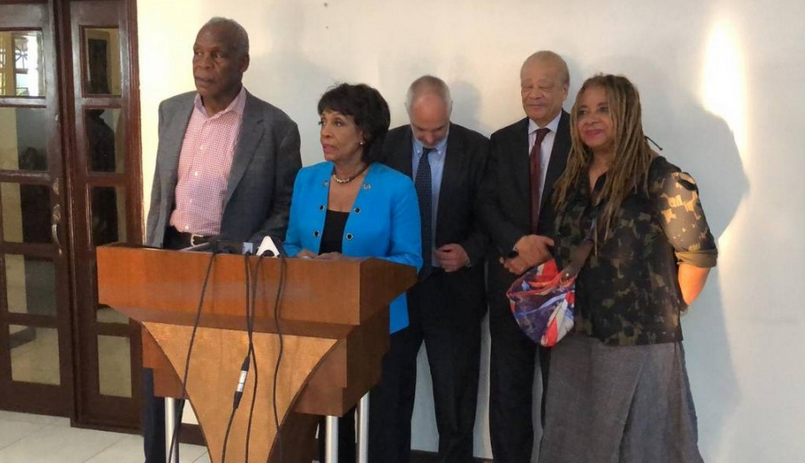 U.S. Rep. Maxine Waters, D-Calif., the top Democrat on the House Financial Services Committee, is adding her voice to the list of U.S. lawmakers concerned about growing gang-related violence in Haiti.

In recent months, gangs have been terrorizing the population, accused of massacring and raping poor Haitians and turning parts of the country into no-go zones. This weekend a police station in the rural Artibonite was attacked after a gang affiliated with a wanted warlord, Arnel Joseph, overpowered police.

Following a massacre in the La Saline neighborhood of Port-au-Prince in November, a bipartisan group of 104 House members called on U.S. Secretary of State Mike Pompeo last month to launch an independent investigation into the extrajudicial killings, as well as allegations of human-rights violation by the Haitian National Police during February’s violent protests that shut the country down for 10 days. Haiti’s ambassador in Washington has denied the accusations.

As late as last week, Haiti’s press reported that gangs have continued their attack on La Saline by setting fires to homes. The growing violence comes just months before a United Nations peacekeeping mission is scheduled to permanently endits presence in Haiti after 15 years, to be replaced with a special political mission.

“When we learned about houses being burned down, and the killings that took place, we were appalled and shock,” Waters said during a press conference at the Toussaint Louverture International Airport prior to leaving Haiti on Wednesday evening. “We listened directly to some of the relatives of victims and victims tell us about that.”

Waters, who was not among the signatories on the Pompeo letter, said the more attention brought to La Saline and the violence, the more it will help “to not only get some engagement with this administration here in Haiti to find out how this is happening, why this is happening, what are their plans, but using whatever leverage and power we have to help make it cease because this is not conscionable and not tolerable.”

She noted that the U.S. government “contributes substantially to Haiti,” aid that is very important for the Haitian government.

“We think that when we talk about how we care about Haiti, and why we’re able to contribute the way that we do, and we do not want to see that abused or misused or disregarded, I think that may give us a little leverage,” Waters said, vowing to get other members of Congress engaged.

Waters said her visit to Haiti was the result of an invitation by former President Jean-Bertrand Aristide to attend the graduation of medical students at his University of the Aristide Foundation in Tabarre on the outskirts of the capital. She was joined by actor Danny Glover, civil rights leader Walter Riley, human rights lawyer and activist Brian Concannon of the Boston-based Institute for Justice & Democracy in Haiti and radio journalist Margaret Prescod. Prescod’s Los Angeles-based public affairs show, “Sojourner Truth,” recently featured a report on the La Saline massacre.

While Waters met with U.S. embassy staff and praised their efforts, she did not meet with Haitian President Jovenel Moïse. She did have a great time with Aristide and his family, she noted.

Glover, who accompanied Aristide back to Haiti following seven years in exile in South Africa, said this marked his first visit to Haiti since Aristide’s 2011 return.

Concannon, speaking in Creole, said, “It’s important to have justice so that people are not once again victims.”