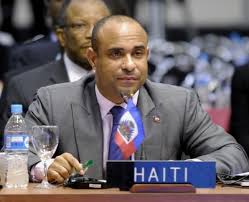 “I’m here in Davos to make the case to the most important people in the financial world,” Lamothe said.

DAVOS, Switzerland — Four years ago this month a devastating earthquake in Haiti thrust the poverty-stricken nation to the center of discussions at the World Economic Forum.

Now, as the 44th annual meeting begins to wind down, the prime minister of the Caribbean country of 10 million has been walking the halls here one last time to ensure Haiti is not forgotten.

“Any interest in Haiti is a big interest for us,” Prime Minister Laurent Lamothe told USA TODAY on Friday in the Swiss ski resort. “There is a lot of solidarity with the Haitian people still because of the input and support we got following the earthquake, but we are a country that has for far too long been forgotten in the investment world.”

More than 300,000 people in Haiti died on Jan. 12, 2010, when the earthquake struck, leveling large parts of the capital Port-au-Prince, and bringing devastation on a scale rarely witnessed. But Lamothe said that despite persistent, and somewhat unhelpful perceptions, Haiti has moved on.

“We have gone past the emergency phase into the nation-building phase,” he said. “What we want to do now is to go from the philanthropy phase to an investment one.”

The prime minister said that for the past four years the country has been working day and night to increase Haiti’s potential as a hub for business, to create jobs, reduce inequality, and to show the world what Haiti — for so long associated with trouble and poverty — has to offer.

“I’m here in Davos to make the case to the most important people in the financial world,” he said.

He has already convinced Blake Mycoskie, the founder of TOMS, the Calif.-based company that gives away one pair of shoes for every pair it sells. The firm will soon begin manufacturing its cool-and-casual shoes in Haiti.

Mycoskie, who travels under the moniker Chief Shoe Giver, told USA TODAY in Davos that Haiti presented a unique opportunity because it is so close to the USA. “We’ll be the only footwear manufacturer there so we are really excited about it. We hope that TOMS can help show the world that Haiti is open for business.”

Mycoskie said his firm would not be receiving any aid or other investments from third parties as part of the expansion. “We’re going to take it slow. It’s not like we are going to change the landscape in Haiti overnight.”

Still, becoming a desirable destination for investment is not something that can be accomplished in four days in Switzerland.

Prime Minister Lamothe said that during the WEF this week investors such as George Soros had expressed interest in the country. For 2013, foreign direct investment increased 25% to $220 million, with close to half of that coming from a deal made by beer brewer Heineken to buy a local bottler.

However, the World Bank ranked Haiti 177 out of 184 in its latest yearly report based on the ease of doing business. And while Haiti did achieve 4% economic growth in 2013, the second fastest in the region, it is still the poorest country in the Western Hemisphere.

“Our strategy is very simple. In order to fight poverty we need to create wealth,” Lamothe said. “But we understand that we have a massive amount of work to do.”