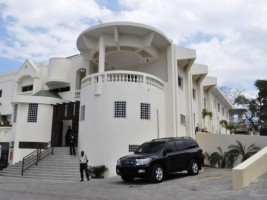 A Haitian investigative judge is asking that a Port-au-Prince restaurateur and accused kidnapper with close ties to the presidential family stand trial along with 13 others for various crimes — including murder, kidnapping, drug trafficking and money laundering.

Woodly Ethéart, aka Sonson Lafamilia, has been jailed since May in the kidnapping of Haitian businessman Sami El Azzi.

Investigative Judge Sonel Jean-Francois filed a 30-page charging document Monday in the case. Obtained by the Miami Herald, it not only holds Ethéart responsible for El Azzi’s kidnapping but describes him and accomplice Renel Nelfort as the “intellectual authors” of Gang Galil, a kidnapping ring. Among its crimes, according to the document: the November 2012 assassination of Haitian National Police Division Inspector Yves Michel Bellefleur. Bellefleur was gunned down while dropping his kids off at school.

Jean-Francois has been under pressure to release Nelfort and Ethéart, who denied any wrongdoing in questioning by authorities. In a Feb. 23 letter, Acting Government Prosecutor Jean Roby Dimanche calls for both men’s release, disputing the investigation.

Pierre Esperance, head of the National Human Rights Defense Network, commended Jean-Francois’ courage, which he said, “shows we have people who want to combat delinquency, kidnapping and organized crime in this society.”

“Despite our justice system being weak, despite it being corrupt, despite it not being independent, you have judges who are honest and have integrity,” said Esperance, who has read the report.

Jean-Francois said between 2008 and 2014, Gang Galil was involved in 15 kidnapping involving 17 individuals, collecting nearly $1.5 million in ransom that was used to buy arms and ammunition, buildings and vehicles.

He also details banks and phone records to show contact between accomplices and Ethéart, who worked at the Ministry of Interior and operated the French restaurant, La Souvenance with wife Marie Taissa Mazile Ethéart. The judge noted that there wasn’t enough evidence to charge Mazile Ethéart. Initially arrested, she was ordered released by another judge early on in the saga.

Among those who provided testimony against Ethéart was gang member Alain Cérélus. He also told investigators that a white Toyota Land Cruiser used in the hit against Bellefleur had been stolen outside a Petionville restaurant.

The report said Bellefleur’s assassination was “a retaliation” by the gang because he was investigating Ethéart on suspected murder and attempted murder by tying up someone and locking the person in the trunk of a car.