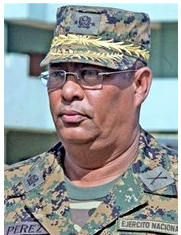 Lieutenant General Joaquin Virgilio Perez Feliz, Minister of the Dominican armed forces, denied that a decision has been taken to send Dominican troops to Haiti under the command or not of the MINUSTAH.

In summary he regrets that the President’s statements were improperly understood, and that the intention of President Fernandez has been wrongly interpreted as a decision. The military leader said that any decision to send troops abroad Dominican is not a presidential decision, but it must “must go through Senate approval as provided in Article 80, paragraph 7 of the new Constitution”.

He deplores that certain Dominican media confused the legitimate presidential intention, to help Haiti [which coincided with a decision of the United Nations Security Council to authorize an increase of security forces in Haiti] as a response to the integration of Dominican troops in the members of MINUSTAH.

The military chief while denying the media interpretation, confirmed the intention of the government of Leonel Fernandez to continue to collaborate in the reconstruction of Haiti.

For many, IF such a decision were actually made, it would give reason to certain Haitian sectors which evoke an hegemonic plan of the current Dominican authorities for Haiti.

Time will tell what truly out about all these politicians in the hope that the final decision will be wise for the good of both countries. It should however be recalled that even late Dominican president Joaquin Balaguer had always opposed to the sending of troops in Haiti, in particular after the first coup d’etat against president Aristide in 1991, and this, in spite of repeated requests of the international community. Balaguer estimated that such a disposition would be comparable with provocation.

Time will tell what truly the remarks of all these politicians, hoping that the final decision will be wise for the good of both countries.