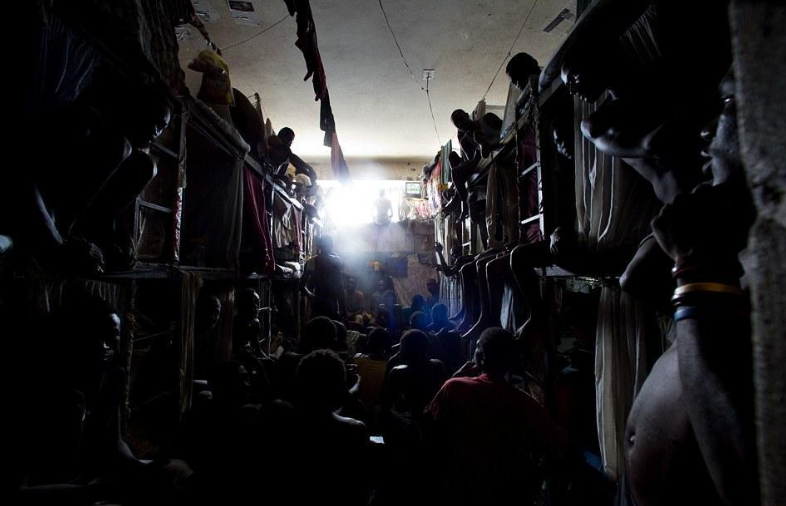 Port-au-Prince (AFP) – Conditions in Haiti’s chronically overcrowded jails are like “acts of torture” and inmates’ rights are being ignored, a human rights group said in a report published Tuesday.

“The general conditions of detention are absolutely inhumane and look more and more like acts of torture,” said Marie Rosy Auguste Ducena of the National Network for the Defense of Human Rights.

“Prisons hold on average three times the number detainees they were designed to house,” the Haitian activist said.

The prison in Port-au-Prince is packed to 500 percent over capacity. The dilapidated facility in the center of the capital is not supposed to hold more than 778 inmates, yet there were 4,111 people being detained there as of October 23.

The lack of space in a dozen provincial jails means that two thirds of inmates do not even have a bed and are forced to “sleep on the floor, on strips of cardboard, cloth, rugs or curtains provided by their relatives,” according to the report, compiled after the NGO spent 10 months inspecting prison conditions.

Even the basic day-to-day needs of prisoners, such as water or bread, are not normally met, the report said.

“The further one goes from Port-au-Prince, the more frequent are the breakdowns in supplies,” Auguste Ducena said.

“In jails in provincial towns, inmates are often forced to spend the day without eating.”

Health care is also woefully inadequate: the report said that the prison system has only one doctor for every 514 inmates.

“On top of all that, medicine is not available and if it is, it is distributed on the basis of auscultation (listening to the heart and lungs with a stethoscope) because there are no facilities to carry out medial examinations,” said Ducena.

Under such harsh conditions, 118 people have already died in jail since the beginning of the year.

“The number of deaths in custody has grown exponentially in recent years,” said the activist.

“You really get the impression that in the eyes of the state, a citizen who lands up in prison loses their fundamental rights.”

The NGO noted that some of those who had died in jail were being held in pre-trial custody.

It said that three quarters of the 11,839 people currently behind bars in Haiti were being held on remand, some of them for more than a decade.