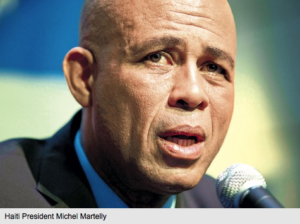 PORT AU PRINCE, Haiti (CMC) – Haiti is worried that the decision by the UN peacekeepers to pull out of six of the country’s 10 regions could undermine security as the French-speaking Caribbean Community (CARICOM) country gets ready for elections later this year.

“The withdrawal of UN troops from these regions during the elections is a big concern for, not only for the government, but also for several countries and other partners supporting the electoral process,” said Fritz Jean-Louis, the minister with responsibility for the elections here.

The pull out is part of a withdrawal plan voted over the past couple of years by the UN Security Council and Jean-Louis said the absence of UN troops in most of the regions during the crucial presidential, legislative and local elections will be a security hazard.

“It is true that we want to nationalise the election process so that the country and its people may fully assume the responsibility of dealing with all the aspects of the organization of elections. But this should be done in a way that allows us first to fill the deficiencies,” he added.

Earlier this year, Justice and Public Safety Minister, Pierre Richard Casimir, had called on a UN Security delegation not to reduce the number of UN Peacekeepers until after the elections.

Election officials said that UN troops will only be deployed in the North, the Artibonite, the South and the West regions.

“This is very bad news for the election process because the UN has been so instrumental in the election security and logistical device in Haiti over the past years,” said Néhémie Joseph, a member of the Electoral Council.

“At this stage of the process, we don’t see how we are going to do it without the UN if we don’t have a good alternative,” said Joseph.

Joseph said that all the ballots and other sensitive election material right after the vote were usually secured and transported from all over the country to tabulation centres in different locations.

“This is a big operation, but the UN Mission its own personnel with the necessary experience, it uses its own vehicles and its own budget to do all that. The Haitian police do not have the adequate personnel, the vehicles and the experience to succeed such an operation,” Joseph said.