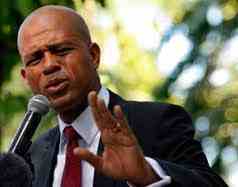 BBC:Haitian presidential election candidate, Michel Martelly, who narrowly missed a spot in the second round run-off, has called for calm amid mass protests by his supporters.

Mr Martelly said his supporters should only hold nonviolent protests and urged them not to rise to provocations.

Demonstrators have set fire to the headquarters of Haiti’s governing party.

They accuse it of rigging the vote in favour of its candidate, Jude Celestin.

Speaking on Haitian radio, Mr Martelly said: “I understand your anger. Protesting without violence is a right of the people… I will be with you until there is total victory.”

The pop star said the “Provisional Electoral Council has plunged the country into crisis with its incorrect results”, which were announced on Tuesday.

Thousands of people have taken to the streets of the capital, Port-au-Prince, since Mr Celestin was declared to have finished in second place narrowly ahead of Mr Martelly.

Demonstrations erupted there and in several cities soon after the results were announced, and President Rene Preval called for an end to the protests in a national address.

In the capital, supporters of Mr Martelly started fires and set up barricades on Tuesday.

Thousands of young people resumed the protests across the country on Wednesday.

Witnesses described flames leaping from the headquarters of the governing Inite (Unite) coalition in the capital after it was set alight.

Protesters told the Associated Press news agency that security guards had shot demonstrators as they attacked the building, but there were no confirmed reports of injuries.

“The people came out to vote for Martelly because [leading candidate Mirlande] Manigat and Celestin are not going to sort anything out. Martelly was ahead and they have stolen the elections,” one protester said.

Reports said that one protester was shot dead and two others were wounded as supporters of Mr Martelly and Mr Celestin brawled with each other in the second city, Cap Haitien.

Officials have not yet confirmed numbers of casualties.

Mr Celestin is regarded as Mr Preval’s hand-picked successor, and the incumbent defended the election result in his national radio address.

But he urged Mr Celestin and Mr Martelly to ask their supporters to call off the protests.

Most observers say the first round of the voting was grossly mismanaged.

The US embassy in Haiti said on Tuesday it was concerned the results were “inconsistent” with vote counts observed around the country.

The close result has led to calls that Mr Martelly also be included in the run-off.

Mr Martelly has said he will not accept a place in the run-off if Mr Celestin is present. He has until 10 December to appeal against the result.