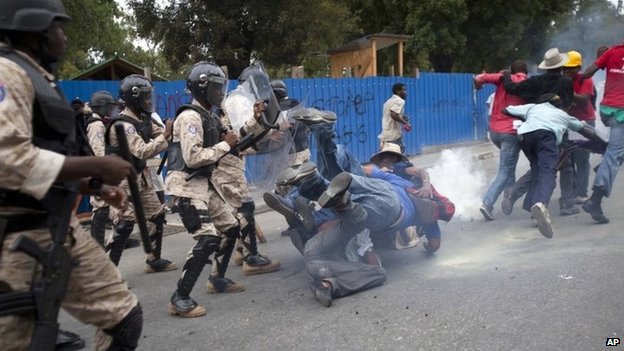 Anti-government demonstrators fall to the floor as they clash with police in Port-au-Prince.

Hundreds of people in Haiti have marched through Port-au-Prince, demanding the resignation of President Michel Martelly.

The protest turned violent as police used tear gas to disperse the crowd.

Protesters threw stones at police and burned tyres in the streets of the capital.

They are angry at Mr Martelly’s reluctance to call legislative and local elections, which were due to have been held in 2011.

Prime Minister Laurent Lamothe resigned on Sunday following weeks of protests, but the opposition insists that President Martelly should go too.

Earlier US Secretary of State John Kerry called on Haiti to hold elections as soon as possible in order to put an end to the crisis.

“Recognizing the concessions made by all sides to resolve the impasse, the United States urges all parties to reach without delay a definitive agreement on all outstanding issues and to carry out that agreement in good faith,” Mr Kerry said.

Mr Martelly was to have called polls in 2011, but they were postponed in a stalemate over an electoral law.

Opposition politicians accuse Mr Martelly of wanting to rule by decree and that legislation that would authorise the vote unfairly favours the government. 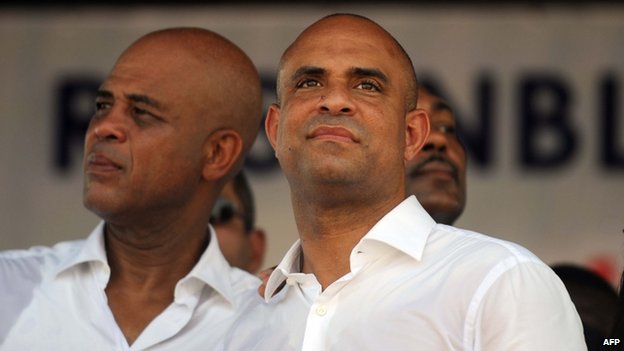 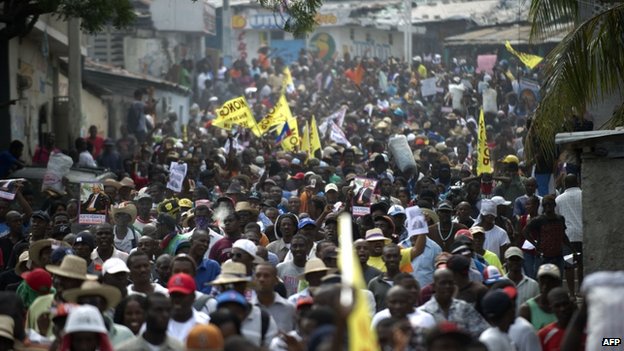 Haiti is the poorest country in the Western hemisphere 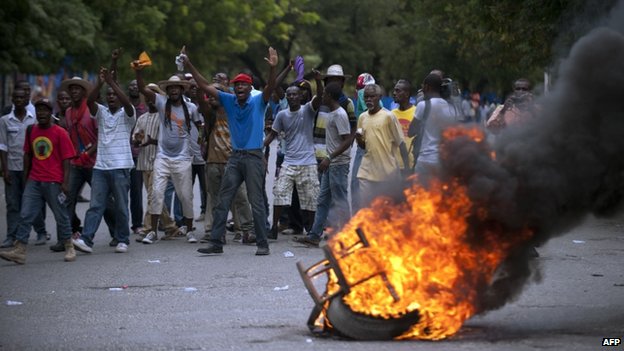 The current parliament’s mandate expires on 12 January. Unless a new parliament is elected by then, the president will be allowed to rule by decree.

Haiti was devastated by an earthquake in January 2010.

Much of the capital has been rebuilt, but the country is still struggling to recover from the tragedy.

Mr Kerry said that “too much progress has been made since the earthquake to risk going backwards now”.

Mr Martelly, a former pop star, was elected in May 2011 with 68% of the vote and strong support from younger voters.

However, he has faced protests calling for his resignation since 2012.

COMMENT: HAITIAN-TRUTH.ORG
Hundreds marched.
Not much of a protest in a nation of 10,000,000 PLUS!