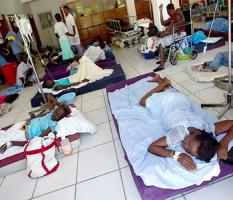 A report compiled by researchers in the US and Haiti has revealed that the cholera outbreak in the nation has not yet been suppressed. The latest findings come despite the fact that foreign nations had ended up directing funds amounting to billions of dollars in aid.

According to the statistics available, the cholera outbreak has resulted in the death of 3,600 Haitians and has been described to be equivalent to epidemic proportions. It needs to be remembered that prior to the outbreak, the country had suffered a massive earthquake in January 2010.

People living in Haiti don’t happen to have access to clean water, with 25% of citizens not even having access to a toilet. A large proportion of people are currently living in tents. All the promises made by the government and foreign governments have seemed to fade away with the current conditions.

The condition of cholera is usually spread because of people coming in contact with human faeces and it needs to be kept in mind that a lack of washing and toilet facilities can result in contamination.

Despite the high number of fatalities involved, researchers involved in the study have warned that the epidemic has not peaked yet and the situation will just get worse with the passage of time. The research was a combined effort of experts from the New York City University and Haitian researchers.