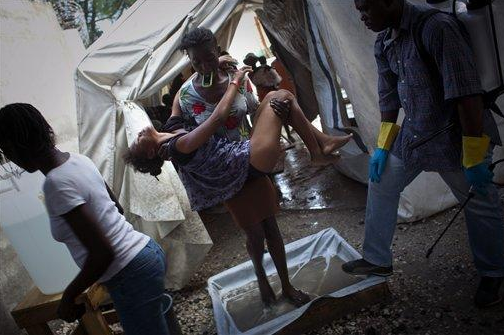 MSPP explains that “this situation demonstrates of a better capacity to control the transmission in outbreak and at the same time the need to enhance efforts to strengthen the management of cases. The humanitarian community continues to support the Haitian government in its efforts not only to ensure a rapid and effective response to the cholera epidemic in improving access to drinking water services, sanitation and health, but also to reduce the vulnerability of populations living in the most at-risk cholera areas. As part of the continuation of this commitment, a humanitarian response plan in which the response to the cholera outbreak is a priority, is being developed.”

The departments of West (especially the metropolitan area of Port-au-Prince), North, Artibonite and Centre are the most affected and record alone almost 76% of cases seen.

This is just a game of numbers an changing definitions.

These people are dying from “Severe Diarrhea” not “Cholera” although they are – in fact – one in the same disease.

A Rose by any other name.

Cholera is still Cholera no matter what you name it!