The cholera outbreak that has killed 3,600 people in Haiti since October 2010 has not been suppressed – despite billions of dollars in promised aid, according to a report by Haitian and US researchers.

This is despite highly-publicised promises of help by aid agencies and foreign governments.

Cholera is spread through contact with human faeces – so lack of washing and toilet facilities is a direct cause of death.

The study says the epidemic has not yet peaked, so unless the situation is addressed there will be more unnecessary deaths.

The report, by New York’s City University, is based on a survey by Haitian sociologists. It says aid agencies have failed to address the real causes of the cholera outbreak – including widespread poverty and unemployment that was endemic before last January’s earthquake.

“Much more progress needs to be made”, says the enquiry; “not only in aid delivery but in coordination”.

The Haitian government says the earthquake killed over 230,000 people. It made around two million people homeless.

The new study says the international community and the Haitian government failed to capitalise on the movement of people out of the capital Port au Prince in the immediate aftermath of the quake.

It says there was an opportunity at that time to undo the mistakes of the past including “failed neo liberal development policies that swelled the population of shanty towns of the capital”.

This was a reference to cutting import taxes on rice in the 1980s. This policy led to a flooding of the local market by US rice, a decline in local rice production, and mass rural-urban migration.

Another “neo liberal policy” was the encouraging of low-wage factory jobs in the capital. This also served as a magnet to rural people.

Aid agencies and the Haitian government should have worked outside Port au Prince, the report says, and “seized the moment to initiate job creation to rebuild rural Haiti’s delapidated infrastructure”.

“Instead, all the food-for-work and cash-for-work, not to mention aid distribution, was centred in Port au Prince. Predictably… the camps swelled to an estimated 1.7 million people at their peak, making the aid response more difficult”. 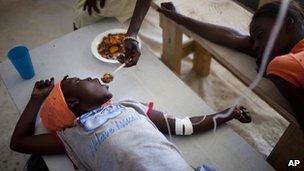 The cholera epidemic has not yet peaked, but the situation needs to addressed

The report says the situation is dire despite the widely publicised promises of aid.

In one camp for displaced people in the Carrefour district of Port au Prince, people without access to a toilet throw their faeces, wrapped in plastic bags, on top of a rubbish pile which is next to a recently-created cholera treatment centre.

As well as criticising the response to the cholera outbreak, the report questions the wider “aid dependency” which the private aid agencies – known as Non Governmental Organisations, or NGOs, have created.

It says some NGOs:

The report says only a tiny proportion of the aid money promised to Haiti has reached the Haitian government – in the early days after the earthquake it was estimated to be just one per cent.

And yet, ultimately, the study says, it is only the government that could coordinate actions to address crises such as the cholera outbreak.

Some NGOs privately criticise the government of Haiti for corruption; foreign governments say they cannot risk handing over money to dysfunctional institutions.

But the report says “pointing fingers at the Haitian government or the Haitian people is not the solution”.

It says some NGOs are more interested in attracting funds – and so perpetuating their own futures – than in solving the problems they say they came to Haiti to address.