The big dig is planned for May 1. It’s part of an ambitious government effort to reforest the country after suffering from landslides and desertification.

Haiti, one of the world’s most deforested countries, launches its first national tree-planting program next month. President Michel Martelly’s government calls the effort “a big signal” that the administration is determined to reverse environmental degradation and address one of the main causes of poverty on the Caribbean island.

Stripped of 98 percent of its trees, Haiti suffers deforestation’s impoverishing side effects, like soil erosion, poor agricultural productivity, and desertification. In the three years since the 2010 earthquake, Haiti has been hit by multiple landslides during its six-month rainy season. This adds to the woes of some of its most vulnerable people, already affected by frequent natural disasters such as hurricanes and earthquakes.

The new reforestation drive aims to replace the 30 to 40 million trees cut down every year for firewood, a common source of fuel for cooking here. The tree planting will take place at seven sites across the country, and 1.2 million saplings will be planted in a single day, May 1, according to Jean Lucien Ligonde, a senior adviser to the ministry of environment.

The four-pronged campaign kicks off just 14 days before President Martelly’s second anniversary in office. Some point to the initiative as a political move – a way to signal to the international community that his government is making strides to tackle some of Haiti’s biggest challenges like environmental degradation and its side-effects.

The campaign will also seek to educate the public about environmental issues, says environment minister Jean Francois Thomas. It will feature radio public service announcements, banners and pamphlets, environmental education in all schools, offer “green” cooking fuel as an alternative to wood, and use the Ministry’s environmental surveillance corps to watch out for illegal logging in protected areas, Mr. Thomas says.

With hands-on technical support from Cuba, $5 million from Venezuela’s Petrocaribe fund, sample pamphlets from Costa Rica, and 1,000 forest guards that it has yet to hire, Haiti is aiming to achieve just under five percent tree cover within three years. 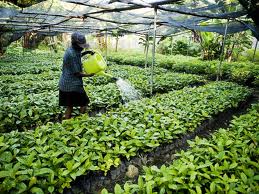 ‘YEAR OF THE ENVIRONMENT’

This is the first time the Haitian government has acknowledged – through actions and words – the country’s ecological fragility. Despite years of warnings from international observers and environmental groups, the government’s only tree planting campaign so far was a small, scattered initiative during the 1980s, when Jean Claude ‘Baby Doc’ Duvalier ruled.

Martelly’s administration has declared 2013 the “year of the environment.” This year’s carnival slogan was the Creole phrase “Yon ayisyen, yon pye bwa,” which translates to “one Haitian, one tree.”

Mr. Felix’s nursery Plantules et Semence Tropicale is one of the private nurseries from which the government plans to buy the saplings. Less than a month before the big launch, Felix says he had “only got an informal order for 100,000 mango, orange, mahogany, cedar, and avocado trees.”

“This is not the way to do it,” says Felix, who has managed nurseries for nearly 30 years. “A contract for plants would be the first step. Then, they should tell us exactly when they need them. We have no problem supplying two million plants every three months,” he says.

But officials insist they have a well-thought-out plan, citing agreements with neighboring countries like Cuba and the Dominican Republic to import seedlings. “We will have 24.5 million trees a year from community nurseries, one million seedlings from the Dominican Republic, we haven’t negotiated a figure with Cuba yet but can get seedlings from there and we will buy the rest from private nurseries,” says Mr. Ligonde.

FORESTS SHOULD GET A REST

Ecologist Joel Timyan who works with the Audubon Society Haiti, founded a decade ago by professionals concerned about the degradation of Haiti’s ecosystem, is doubtful the government can achieve its stated goals, as well. Not only does the country face basic challenges like providing eco-friendly fuel to its impoverished citizens, there are important historical issues that stand in the way. “Only when the rules of tree planting and access to land are clearly understood” by Haiti’s many land users can a program like this succeed, Mr. Timyan says.

He says for this project to work, the land must be allowed to “rest” long enough for trees to grow and forests to develop.

“This takes longer than an election cycle,” Timyan says