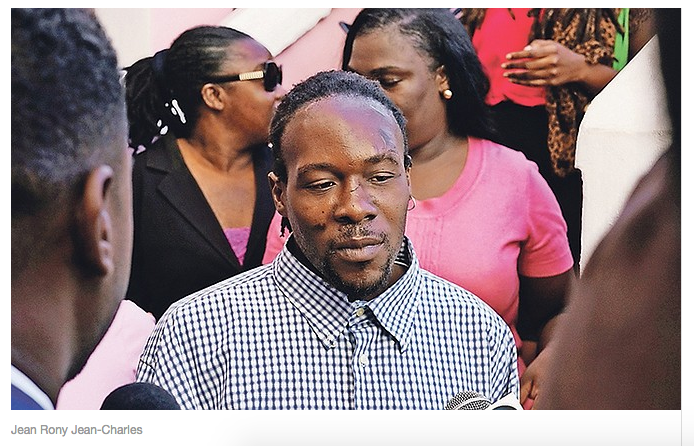 DESPITE having no record of Bahamas-born Jean Rony Jean-Charles being deported, the Haitian Embassy in Nassau yesterday confirmed it delegates two consular agents to notify individuals at the Carmichael Road Detention Centre of their impending deportation.

The embassy furthered, in accordance with a signed agreement with the Bahamas government on repatriation, officials must be informed 72 hours before all repatriations.

The agents are sent to inform detainees as a precautionary measure for potential reports of abuse, the embassy wrote in an email response to questions placed by The Tribune.

Mr Jean-Charles was flown to Port au Prince, Haiti on November 24, 2017 after not being able to prove he was in the country legally, according to former Immigration Director William Pratt.

However last year, representatives from the Haitian embassy told The Tribune they had no record of Mr Jean-Charles being repatriated.

The email response read: “According to the signed agreement between both government on repatriation, the embassy must be informed by the Bahamian authorities 72 hours before all repatriation. This period of time is to allow the embassy to contact the Ministry of Foreign Affairs in order to ask civil aviation the landing permit number.

“No official from the embassy is on the plane. When the immigration Department sends the list to the embassy of the illegal immigrants to be repatriated, the embassy delegates two consular agents to notify of the individuals involved at the detention centre before the repatriation. Just in case any abuse is reported.”

The Tribune sought clarification from the Haitian embassy in Nassau over the repatriation process after it reported on the experience of Mr Jean-Charles – whose case is now before the Court of Appeal.

“And then, the embassy (will notify) the Ministry of Foreign Affairs in Haiti of the said repatriation. In addition, the embassy still asks the Haitian authorities to verify the identity of repatriates from the said list when the plane landed at Port-au-Prince,” the embassy’s email read.

It added: “There is a commission formed by three institutions ( Ministry of Foreign Affairs, Department of Immigration and ONM). When they arrive in Haiti there is an organisation called ONM (National Organisation of Migration) which ensure their transportation in provincial cities.”

Mr Jean-Charles did not apply for citizenship when he was between the age of 18 and 19, and was deported at age 34 after being held at the Carmichael Road Detention Centre for some three months.

His attorney filed a habeas corpus application questioning the lawfulness of his detention, but it was later revealed that he had been deported.

In response to a subsequent constitutional motion, Supreme Court Justice Gregory Hilton determined ordered the government to “immediately” issue a travel document for Mr Jean-Charles to allow him to return from Haiti to the Bahamas at the government’s expense and to grant him legal status no later than 60 days after his return, and upon him making an application.

The government has appealed the Supreme Court ruling, and a stay application will be heard today at 10am.

Attorney General Carl Bethel has said the case of Mr Jean-Charles placed the government in a position uncovered by law or the Constitution, and also exposes a significant and far-reaching legal challenge over the verification of birth certificates.