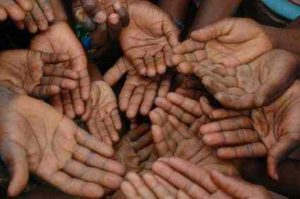 PORT-AU-PRINCE, Haiti — Marie Bolivar, a gray-haired woman with a raspy voice, crushes peanuts into paste for sandwiches which she sells by the roadside for 12 cents apiece. These days the paste is thinner, because the price of peanuts has jumped by 80 percent.

But Bolivar, 60, says she still has trouble feeding her four children and paying the rent. “I can’t survive like this,” she said on a recent afternoon as she piled freshly crushed peanuts on a small plastic tray.

Soaring food prices aren’t new in Haiti, the poorest country in the Western Hemisphere and heavily dependent on imports. Now those prices are rising again, mirroring global trends, while the cost of gasoline has doubled to US$5 a gallon. Haitians are paying more for basic staples than much of Latin America and the Caribbean, an Associated Press survey finds.

More than half of Haiti’s 10 million people get by on less than US$2 a day and hundreds of thousands are dependent on handouts. Undernourished children are easy to spot by the orange tinge in their hair. “Haitians have less room to increase their expenditures on their food,” said Myrta Kaulard, Haiti’s country director for the UN World Food Program. “This is a serious concern.”

Bolivar is one of many who cope as roadside vendors. They are getting squeezed from both ends — rising prices and customers with less to spend.

It’s ironic to hear Bolivar say “Everything was much easier a year ago,” when a year ago Haiti had just endured a quake that killed 300,000 people and laid waste to large parts of the capital, Port-au-Prince. What she means is that food was much cheaper then because of the emergency supplies being rushed in.

But as the aid operation scales back and the market reasserts itself, prices are soaring again. Last month a cab strike was called to protest rising gasoline prices, but it fizzled because drivers were so desperate for fares.

One bit of good news has been the price of rice, Haiti’s staple food. Pushed down by the free food being shipped in after the earthquake, it fell to US$0.92 a kilogram in September, climbed to US$1.38 in January and then began to fall, according to the UN Food and Agriculture Organization.

But corn, which cost US$0.68 a kilogram just before the quake, was almost double the price in March.

Incomes haven’t risen, however. The minimum wage is US$5 a day but most Haitians don’t have a job that would pay them that minimum. So, like Bolivar, they cope through “degaje,” a Creole term that means “making do.”

It also depends where they shop. In a high-end grocery, a kilogram of white rice can cost as much as US$3.03. But the street markets close after dusk, leaving customers dependent on supermarkets.

Nature and the outside world have all taken their toll. Erosion, deforestation, flooding and tropical storms make farming difficult. American imports are stiff competition for farmers. Haiti imports nearly all of its food, including more than 80 percent of its rice, known here as “Miami Rice.” A whole chicken costs US$8 in Haiti — double the price in Peru. Argentines earn much more than Haitians, but pay less for a kilogram of rice.

The rise of garment factories in the cities since the 1970s has denuded the countryside of working hands. Bolivar is among those who moved here. She lives in a small cinderblock home in a slum in the relatively affluent city of Petionville.

“There was nothing for me in the countryside,” she said.

The winding down of quake aid is meant in part to encourage quake survivors to leave their camps and to stabilize market prices. Groups such as the WFP have launched cash-for-work programs, school meals to ensure attendance, and efforts to get aid workers to purchase goods locally.

But for Bolivar, it’s the cost of living that overshadows everything. She says she usually eats just once a day. One of her sons had to drop out of school because she owed US$69 for two months of his tuition.

A daughter helps out from her earnings as a waitress at a Lebanese restaurant popular among Haiti’s moneyed class and foreign aid workers.

Bolivar said she hopes things will get better under Michel Martelly, the musician elected as president on March 20. “We’re waiting for all the promises he made,” Bolivar said. “People want commercial activity. People want jobs. People want to eat.”