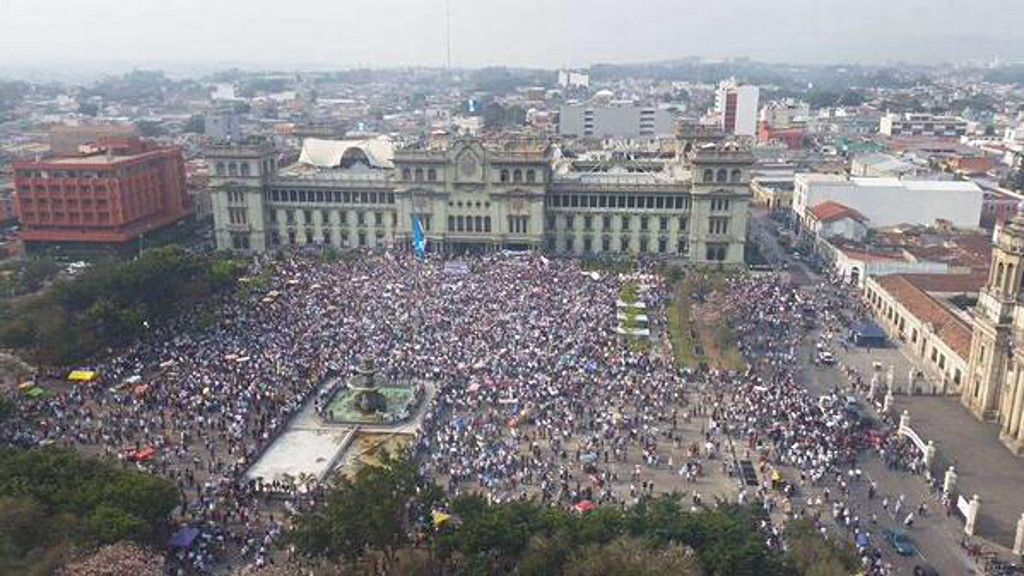 Thousands of protesters called for a national strike in Guatemala on Thursday as some businesses closed and marchers blocked highways demanding the resignation of President Otto Perez Molina for alleged bribery.

With at least five cabinet ministers having quit since Saturday, lawmakers are expected to form a five-member committee as soon as Thursday to consider allegations that the president led a tax fraud scheme. The committee will present its findings to the 158-member legislature, which will vote on whether or not to revoke the president’s immunity from prosecution. Doing so requires 105 votes.

Hundreds of schools and local businesses have announced support for the strike, using the social media symbol #YoEstoyPorGuate, suspending classes and closing their doors as demonstrators prepared to march to the National Palace in Guatemala City. Local branches of McDonald’s and Domino’s Pizza said they are taking part in the strike. Perez Molina, whose term ends in January, has rejected the allegations and vowed to stay in office.

“This is a turbulent time in Guatemala,” said Sofia Rada, a research associate at the Council on Hemispheric Affairs. “It really says a lot about the weakness of Guatemala’s institutions. As an investor, I would be weary.”

“The economy has been isolated from the political crisis,” Recinos said at a news conference. “Guatemalan bonds have been experiencing small fluctuations within the normal margins. We have always honored our debts.”

Recinos is filling in for central bank President Julio Suarez, who has been jailed since May for his alleged involvement in a separate scandal involving contracts at the Social Security Institute. Suarez has said he is innocent.

Courts sent former Vice President Roxana Baldetti, who resigned in May, to jail Wednesday for her role in the scam, and the country’s finance, economy, infrastructure, education and health ministers have all quit since Saturday alongside other top aides.

The state’s attorney’s office, which represents the state in legal proceedings, joined the business chamber and Metropolitan Archbishop in calling for Perez Molina to step down.

The turmoil takes place barely a week before Guatemala hosts first-round presidential elections on Sept. 6. If none of the 14 candidates secures a majority, a runoff will take place in October.