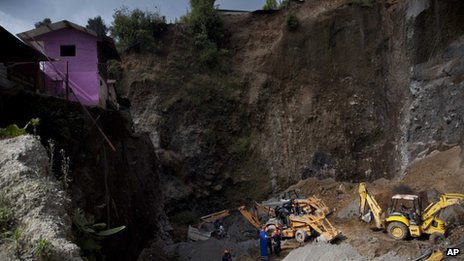 At least 39 people have been killed and many more are missing after a 7.4-magnitude quake hit off Guatemala’s Pacific coast, the president has said.

Officials said landslides had buried roads and it would take 24 hours to restore links to the quake-hit area.

Frightened people fled from offices and homes around the region, as buildings shook from Mexico City to San Salvador.

The director of Guatemala’s Seismological Institute, Eddy Sanchez, said it had been the biggest tremor in Guatemala since 1976, when 25,000 people died in 7.5-magnitude quake.

There have been dozens of aftershocks to Wednesday’s quake, four of them over a magnitude of 5.

President Perez Molina has given several news conferences, each time raising the number of casualties.

He was touring the affected area and said 39 deaths had now been confirmed in what he called a tragedy.

The national voluntary fire service gave details on its Twitter feed of the damage across the San Marcos region, describing how firefighters had pulled five bodies from the rubble, including that of an 11-year-old boy.

In the town of San Cristobal Cucho, 10 members of one family were killed when their house collapsed.

Fourteen houses have been destroyed in Quetzaltenango, a city that houses dozens of language schools popular with tourists.

The US Pacific Tsunami Warning Center said in a statement there was no threat of a destructive widespread tsunami.

But it added: “Earthquakes of this size sometimes generate local tsunamis that can be destructive along coasts located within a hundred kilometres of the earthquake epicentre.”

Panama, El Salvador and Honduras have offered their help with the rescue operation.