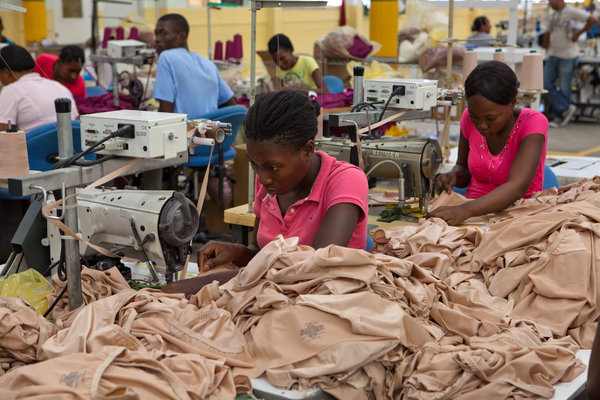 Workers in a garment shop in Haiti. Production quotas and overtime figure in a report that says such employees are underpaid.

MEXICO CITY — Garment factories in Haiti, the backbone of an effort to revive the country’s earthquake-shattered economy, have seriously shortchanged workers of their wages to keep costs of their T-shirts and other export goods low, according to a report to be issued Wednesday by a labor rights group.

The report, prepared by the Worker Rights Consortium, focused on 5 of Haiti’s 24 garment factories and found that “the majority of Haitian garment workers are being denied nearly a third of the wages they are legally due as a result of the factories’ theft of their income.”

The group said that the factories deprive workers of higher wages they are entitled to under law by setting difficult-to-meet production quotas and neglecting to pay overtime.

It said that offenders included the Caracol Industrial Park in northern Haiti, which the United States helped build and has cited as a centerpiece of reconstruction efforts, and factories that make products for prominent retailers like Gap, Target and Walmart.

Scott Nova, the consortium’s executive director, said in an interview: “What goes on here is not some occasional violations where most companies are in compliance and a few are not. You have across-the-board systematic, willful noncompliance with straightforward labor law by a large margin in a way that’s very destructive to workers.”

The group’s report follows one in April by Better Work, an independent labor compliance group backed by the International Labor Organization and an arm of the World Bank, that found widespread wage violations in all 24 factories.

The Better Work report said just 16 percent of apparel workers who are paid by the number of pieces they produce earned 300 Haitian gourdes for an eight-hour day, or about $6.90, a minimum benchmark the factories must offer such workers.

The Worker Rights Consortium said that in all five factories it investigated, workers needed more than the normal 48-hour week to produce enough to be paid that much, and they were also not adequately compensated for the extra time they worked to meet the quotas. Many workers were paid 200 gourdes, or about $4.60, the minimum wage for nonpiece work. The time-and-a-half premium for overtime, if paid at all, was often based on 200 gourdes rather than 300.

Better Work is also expected to release its latest report on Wednesday. Richard Lavallée, the group’s program manager, said Tuesday that there has been an increase in workers earning 300 Haitian gourdes, but he declined to release details or to comment on the findings of the Worker Rights Consortium.

He said Better Work and a Haitian government panel had begun work to clarify the wage law and its obligations.

The consortium’s report is bound to add to the debate in Haiti and abroad over the garment factories, which the government and industry supporters contend provide desperately needed steady jobs in a country with few of them and will, they say, eventually lift the economy. Labor rights groups argue the factories exploit workers and pay unfair wages that are too meager for Haitians to support themselves, but that allow major retailers to keep costs of their products low.

Henri-Claude Müller-Poitevien, the Haiti prime minister’s adviser on investment, said Haiti was working on training workers to improve their productivity. The industry is still trying to rebound after embargoes in its politically unstable years of the 1980s and ‘90s, and the January 2010 quake, took a toll.

He disagreed that factories should adjust their quotas, because, he said, that might send business to Cambodia and other low-wage countries Haiti competes with. “We do care to get workers enough training and skills to perform,” he said. “This is a step-by-step process. We know where we are lacking and we are addressing it and finding a solution.”

Lon Garwood, a spokesman for Sae-A, a South Korean manufacturer often criticized for its labor practices in developing countries and the main factory tenant at the Caracol park, disputed the group’s findings, saying all workers earned at least 200 Haitian gourdes for the day, though he did not say how many met the higher rate.

Although he had not seen the report, he added, “if it is indeed as inflammatory as it appears, it only hurts the workers they want to protect because such a report is likely to make retailers wary and weary of Haiti and cause them to steer clear.”

Charles Henri Baker, a former Haitian presidential candidate and an official with One World, one of the factories criticized, said in an e-mail, “All I can say is that we are monitored by various compliance organizations, our clients in the U.S. and the Haitian Ministry of Social Affairs and Labor, none of them have ever made these allegations.”

Retailers named in the report, including Target, Walmart and Gap, whose products are made at the factories, would not comment directly on its findings, but said they cooperate with the Better Work program in an effort to improve wages and working conditions.

Jessica Deede, a spokeswoman for Target, said of its Haitian factory contractor, “we feel confident they are taking the right steps to meet piece-rate wage standards as the new factory continues to train and develop workers.”

The Worker Rights Consortium is a 12-year-old independent labor rights group financed by 180 American colleges and universities, including Harvard, Stanford and the University of Michigan. It monitors factories in dozens of countries, including Bangladesh, Honduras and Vietnam, that produce licensed goods with university logos.

Some piece workers said they have struggled to earn 300 Haitian gourdes, that the minimum nonpiece pay of 200 gourdes makes it hard to make ends meet.

“I am forced to live with debt,” said Rositha Guerrier, 27, who has worked at Sae-A for more than a year and said she was told she would be paid 350 Haitian gourdes a day, but makes 200. But like many workers she prefers to stay on the job because she has found few alternatives.

“I hope they will still increase my salary,” she said. “Friends have told me to leave this job. But instead of staying at home to do nothing, I prefer to work in these conditions.”

Yannick Etienne, a labor organizer in Haiti, said a government bent more on developing the industry than protecting workers has not addressed the problem. “When a government is trying to attract investors on the basis of cheap labor to create jobs, this kind of violation is deemed to happen and accepted as the norm,” she said.