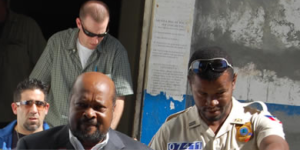 WASHINGTON — A former official of Haiti’s state-owned national telecommunications company was sentenced to four years in US prison on charges related to a money laundering and bribery scheme, the Justice Department said Wednesday.

Robert Antoine, 62, pleaded guilty earlier this year to charges of conspiracy to commit money laundering in the scheme which took place when he was director of international affairs for Haiti Teleco from May 2001 to April 2003.

According to US prosecutors, Antoine, who lived in Miami and in Haiti, admitted that he accepted bribes from three US telecommunications companies and thereby and that to disguise the origin of these funds, laundered them through intermediary companies.

US District Judge Jose Martinez in Florida sentenced Antoine to to serve three years of supervised release following his prison term and ordered him to pay 1.85 million dollars restitution and to forfeit an additional 1.58 million dollars.

Others have pleaded guilty in the scheme including some sentenced to prison.

Antoine’s successor at Haiti Teleco, Jean Rene Duperval, and Duperval?s sister, Marguerite Grandison, were indicted along with Antoine in December, 2009. Trial for these remaining defendants is scheduled to begin July 19.

US authorities said the government of Haiti provided “substantial assistance” in gathering evidence during this investigation.

2 thoughts on “Former Haiti telecom official sentenced to US prison”